By Jonas Swyer and Samantha Judge 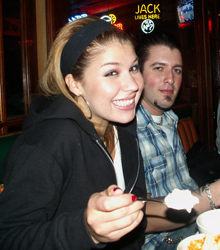 In general, I like to keep my consistent drinking habits far away from places that can lead to untimely drowning deaths. You really never know which Captain and Diet-inspired mermaid hallucination is really just a rickety seaweed covered gate overlooking the ocean.

The Hermosa Beach pier is an exception to this rule, as there are a number of great watering holes (as well as sturdy fencing on all sides of the pier). Now, thanks to a revamped and delicious dining scene, I can visit the pier just for the food … well, we’ll drink a little with dinner … and after dinner… but that’s just to compliment the food. Come for the food, stay for the drinks and have fun in Hermosa.

For the clam chowder connoisseur, their bowls would be revered in Boston (and it’s a Holy Grail). If you’re not a fan of clams, they also offer salmon chowder, lobster chowder and the house specialty: Bourbon Street Soup.

The clam chowder, the owner’s own recipe, is out of this world. But since Fenner made such a killing with the clam chowder, he ventured into exploring other fancy filets of the sea.

The lobster chowder is definitely the second best. The lobster maintains tenderness and flavor without being too fishy.

The best of the soups, by far, is the Bourbon Street Soup. It’s spicy, rich and overwhelmed with an abundance of the fresh fish of the day. With a tomato base, and a spicy bite to it, it’ll clear your head cold. —SJ

Normally, I’m all for restaurants named after mythological beasts. Show me a dining establishment called “Unicorn” or “Narwhal” and I’ll certainly do some quality eating there.

The problem with Dragon, though, is that it’s not really sure whether it’s a restaurant or a club (the other problem is that dragons are nowhere near as cool as unicorns or narwhals, but that’s an entirely different story).

It’s not that clubs can’t have good food, Hollywood’s Ritual has an extensive and exquisite menu, and it’s not that restaurants can’t provide a fun club atmosphere (Santa Monica’s World Café and Enterprise Fish Co., for example). It’s just that Dragon is stuck somewhere between the two while not really succeeding at either.

The set-up is fine for dancing and drinking but nothing spectacular, while the majority of the appetizers strongly resemble the things I microwave while watching Tivo-ed episodes of “Two and a Half Men.” The only exception, though, are the barbecue Chicken Wings. They’re amazing.

Anything that bothered me about Dragon went right out the window the moment the wings entered my mouth. I know that might’ve sounded dirty, but it’s funny how amazing oral sensations can help you forgive other shortcomings. —JS

The owners are from Colorado, and since water freezes at 32 degrees celsius, they thought this was a clever little reference to their frigid hometown. Also, to attract a football frenzy crowd, the name refers to the call of the quarterback.

The atmosphere is lounge-y. It’s a great place to catch a game, and most important, the food is phenomenal.

The executive chef, Ben Wright, was formerly employed as a chef at the Four Seasons. Serving a blue cheese brushed filet minion topped with sautéed onions would seem like an Atkins advocate’s dream come true. But when coupled with the mac and cheese (containing gouda, jack and cheddar), your heart might explode in its chest in sheer excitement.

Each morsel of food on this menu is amazing. And if you’re new to experimental eating, this should be your boot camp. There’s a Chipotle barbecue chicken that would make Mexican-cuisine-molesters defy Taco Bell.

The lobster and crab enchilada challenges everything you think you can roll in a flour tortilla. The miso-glazed halibut is reminiscent of traditionally Japanese flavor but also brings out the subtleties – halibut is usually hidden under creamy sauces and cloudy concoctions that mask its natural goodness.

Overall, if you’re looking for a good meal that opens your palate to new flavors, Blue 32’s cuisine is right up your alley, without being too pricey or haughty. —SJ

As your second grade teacher might have told you, sharing can be fun. While I could never understand why it would be fun to share my toy tow truck and broken car with some runny-nosed kid named Jeffy, I now know that an already great meal at Mediterraneo is that much more fun when shared with friends.

The tasty tapas menu opens up for you to sample a smorgasbord of Spanish-inspired delicacies, rather than settling for one or two for yourself. The Chorizo Bilbao, Patatas Bravas and Spicy Black Bean Hummus are all amazing, and the tasteful décor and aisles of tables really create a comfortable environment.

The prices are reasonable, the staff is friendly and although many of the health-conscious Hermosa Beach diners will pass on it (after all, it’s beach season year round here), you have to get the Panna Cotta for dessert. For the layperson, Panna Cotta is a cooked vanilla-infused cream topped with berry goodness.

For more berry goodness, their chocolate-covered strawberries are simply spectacular … as everyone knows that the only way to make an already delicious item even better is to cover it with a thin layer of chocolate (for further proof look no farther than my earlier literature in Campus Circle on dipped cones). —JS