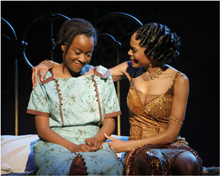 I loved the novel by Alice Walker. The film is one of my all-time favorites, and now I am enamored with the musical!

Oprah Winfrey’s presentation of “The Color Purple” is a wonderful experience. The ensemble cast is tight as a drum and delivers a performance to be proud of.

But don’t expect a musical version of the film. You aren’t going to hear the numbers you’ve grown accustomed to. But part of the appeal of this show is that they take a well-known project and make it their own.

I imagine it would be difficult to become as involved with the characters if I had not already been familiar with them through the book and film. Someone new to the story will find this representation a bit too brisk to be able to fully embrace the different personalities represented.

The big musical numbers are impressive, but the time they consume could be better devoted to more character development. Jeannette Bayardelle, however, gives an inspired performance in the lead role of Celie.

She seamlessly delivers a convincing portrayal of the character as she evolves from a frightened, ignorant 14-year old girl to an empowered, independent woman. She brought down the house with her rendition of “I’m Here.”

Michelle Williams (of pop group Destiny’s Child fame) holds her own as the willful songstress Shug Avery and delivers some fun, sexy insight into the character. Stand-out performances by Stu James as Harpo and Felicia P. Fields as his wife Sophia accent the production and add to the high caliber of talent that rounds out the cast.