Gallows: The Shape of Punk to (Maybe) Come 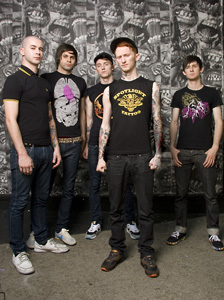 “With Gallows, it’s a volatile thing,” starts bassist Stu Gili-Ross on the subject of his band’s newly increasing popularity, though he really couldn’t have picked a better word to describe every aspect of his band’s dynamic. Having carved out a name for themselves via pure word of mouth buzz on last year’s Vans Warped Tour, the English punks may be building themselves up the old fashioned way, but are also very aware that modern audiences’ attention and praise are oftentimes fleeting.

And this is just assuming they can hold the band together themselves.

“It’s weird because we didn’t expect it,” Gili-Ross continues of the punk scene notoriety. “We thought we’d put out an album, maybe get reviewed in Kerrang! and a couple of fanzines, then continue playing in our friends basements and maybe do some support slots for bigger bands.

Rounded out by guitarists Laurent Barnard and Steph Carter, drummer Lee Barratt and vocalist Frank Carter, the band has quickly earned the acclaim of both audiences and their peers alike with their in-your-face and gimmick free approach to traditional piss and vinegar punk.

“It’s a proper rock ’n’ roll show. I don’t know how else to put it without sounding like a complete tosser,” jokes Gili-Ross. “When you think of the basic tenements of rock ’n’ roll, that’s what you get. It’s not some diluted, pre-packaged version. It’s however we’re feeling on that day. It’s carnage.”

And though the fan support is surely nice for them, validation from some of their more established tour mates doesn’t hurt either.

“It’s good to hear bands we look up to giving us a shout out onstage. That’s the kind of thing that’s kept us going,” says Gili-Ross, who hopes his band can similarly have the staying power of punk’s icons, regardless of whether or not there is conventional mainstream success attached to it.

“Longevity is one of the things that earns you respect,” he says. “Even the people who aren’t into the music of Bad Religion or Pennywise will respect that they’ve been doing what they’re doing for so long.”

As much of a struggle as it was for the members of Gallows to get to this point, however, one could rightly assume they wouldn’t give up without a Pabst Blue Ribbon-fueled bar brawl level fight either. Recalling a time that wasn’t so long ago while they were working on their debut album, Orchestra of Wolves, Gili-Ross says, “We were hanging by a thread just to keep the band together. Frank quit a bunch of times, and we were in this position where we agreed to do this album and had a deadline to meet, but no singer, with only three songs that we had on a demo.”

And though he can laugh in retrospect, there’s a self-aware tonality to his words that speaks of his appreciation for each day he can continue to do this job that’s much louder than an actual verbalization of it. It’s for that reason that songwriting has become such a collaborative process for the band members.

“We all like to try and be as involved as we can because we all get the feeling this could be a short-lived thing, so we all want to have as much input as we can to make our mark,” says Gili-Ross, adding, “We’re all such different personalities, but that passion in common is what holds it together.”

Though Gili-Ross understands better than many the importance of taking each day as it comes, he need not worry, as he and his band mates are also better than most, if not all of their contemporaries, at leaving a very lasting impression.

Orchestra of Wolves is currently available. Gallows will perform Jan. 23 at the Troubadour in West Hollywood. For more information, visit www.gallows.co.uk.