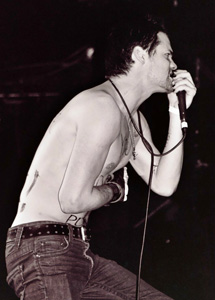 Does appearing on Friday night soaps like “Once and Again” or starring in romantic dramas like A Walk to Remember give you a sort of ironic cred? Or does it make you the odd man out when you team up with one of L.A.’s original punk bands? With actor Shane West fronting the Germs in place of the late Darby Crash, “You’re So Oi!” written on his back in mockery of the leather-and-spike-coated 16-year olds who’d come to shout along, it seemed odd that no one would mock him back for his equally “punk” black nail polish or, hell, his resumé.

West mimicked the sloppy vocal styling of Crash better than expected, and had a grand time tossing a full meal over the audience (beer, water, Tostitos, cake chunks), but his poses capped off what seemed a giant photo-op of a reunion. Blowing sarcastic kisses and sneering that the fans before him looked “silly” in punk garb, it felt as though West was daring to tease and taunt us, the fans who weren’t lucky enough to be fronting a famous punk band.

Even Lorna Doom and Pat Smear stood together for a number of photo-friendly moments, and though far more entitled to such than West at this point, the sounds coming from their bass and guitar were nearly unrecognizable, with Doom’s bass overpowering the once-clear treble of Smear’s guitar, giving their songs a heavy masculinity that wasn’t originally there.

What earned greater applause than the Germs themselves was the female fan who got on stage to steal the mic for “Caught in My Eye.” Garnering even greater enthusiasm were the Adolescents, whose set was wasted on a supporting slot – even with their collectively worn appearance and Tony Cadena’s need for an inhaler mid-set, the O.C. group was tight, heavy and fierce enough to prompt fights.

It was, in fact, their ending with “Kids of the Black Hole” that caused a number of fans to plead for more, of which not much could be heard after the Germs finished up with “Lion’s Share.”