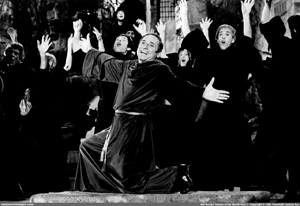 Brooks, the king of movie satire, has written, directed and produced 12 movies, five plays and a smattering of television projects, earning him the distinction of having won all four major entertainment awards (Grammy, Emmy, Tony and Oscar). In honor of the 40th anniversary of his debut film, The Producers (1968), the American Cinemateque is showing all of Brooks’ movies in six nights and even bringing the man himself for Q&As.

If you’ve never seen a Brooks movie, you haven’t truly laughed. What Monty Python is to British humor, Brooks’ movies are to Americans.

The parodies vary from decade to decade, but are always quintessentially Brooks – politically incorrect and profane conglomerations of recognizable tales – making them timeless cult favorites. For example, Star Wars, Alien, Planet of the Apes and 2001: A Space Odyssey combine to make 1987’s Spaceballs where Lord Dark Helmet is played by an awkward Rick Moranis.

Although recent parody movies (such as the Scary Movie quadrilogy) have attempted to do for today’s college kids what Brooks has been doing since our parents were necking in the theater, they have failed to capture the essence of Brooks’ nonchalant characters (over-exaggerated toilet humor is so 2002).

So catch a glimpse of the original satirist starting tonight, with The Producers and The Twelve Chairs (1970). They will be running semi-chronological double features of Brooks’ masterpieces; and although Brooks will be on-hand to introduce the screening tonight, don’t miss out on Friday, when he’ll come back for a discussion during the break between Blazing Saddles (1974) and History of the World Part I (1981).

Oh, yes, Mel. It is good to be king. The Aero Theatre is located at 1328 Montana Ave., Santa Monica. For more information, visit www.americancinematheque.com.