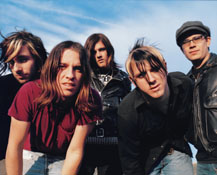 At a time when rock bands like Velvet Revolver are dominating the airwaves alongside emo and pop punk groups, there’s one band that pulls all three genres together into one explosive amalgamation of ’80s glam metal, classic rock and punk. Letter Kills is the bridge that links the old with the new with their appropriately titled CD, The Bridge. Their debut album was produced by Jim Wirt (Incubus, Hoobastank) and mixed by Tom Lord-Alge (The Rolling Stones, blink-182).

With eclectic influences that include Pink Floyd, Tom Petty, The Beatles, In Flames, Bright Eyes and even Frank Sinatra, the Temecula, Calif.-based quintet’s music melds the past, present and future of rock ’n’ roll. The band’s sound is an intricate web of musical genres seamlessly bound together into one cohesive whole. Sounds complicated, but as vocalist Matt Shelton says, the philosophy behind their music is akin to the concept behind the cover art for The Bridge.

"We wanted something really simple, bold, and classic," explains Shelton. "Something that’s not hard to look at, ’cause that’s kind of how our music is. We created [music] so that it’s not hard to listen to – something you can listen to for the first time and enjoy."

In 2002, Shelton, along with guitarist Timothy Cordova and drummer Paul Remund, wrote together for a few months before adding guitarist Dustin Lovelis and bassist Kyle Duckworth. They played any gig they could and started attracting industry attention with their explosive live shows.

Shelton remembers one show in particular. "I used to throw the mic into the crowd and then pull it back, kind of making them all dodge it, just to scare ’em a little bit." Shelton says with a laugh. "I did that in Florida [and] it was really hot and humid; I was all sweaty. I threw it, and when I went to pull it back, my hands were slippery and I missed it. It nailed this chick right in the face!"

After seeing Letter Kills’ exuberant shows and hearing their EP in 2003, Island Records quickly signed the band. That three-song EP included "Don’t Believe," the first single from The Bridge, which Shelton describes as "an awesome introduction for us. We want to teach kids that they can’t put their faith just in people. That they have the power to be as big as the people they look up to, if not bigger.

"I want to be the best example to these kids as possible. But I want them to find their hope in something else, something bigger than a person," says Shelton, "because I am just like them." A strong sense of spirituality is reflected in the band’s lyrics, yet they choose not to use their songs as a way to preach to their listeners.

Since signing, Letter Kills has toured with heavy-hitters such as Thrice, Coheed and Cambria and Sugarcult. After playing several dates on last year’s Warped Tour, the band was asked to play the whole tour this year. This fall, Letter Kills will be a part of the 2004 Fusion Tour, sharing the stage with Story of the Year, Lostprophets and My Chemical Romance.

Every LK show is closed with the song "Shot to the Chest," during which Shelton sings his favorite lyric, "I hope this makes you proud." This sentiment pervades the actions the band puts forth in all they do. "We’re a band that really doesn’t like gimmicks. We’re just all about the music," Shelton states. "We want people to like us for our music, not based on the way we look or the style of music we are, or if we do back flips."

The band lifted their name from the biblical book of Corinthians: "For the letter kills, but the Spirit gives life." Letter Kills strives to give their fans more than just an image to emulate or a poster to hang on their wall – and in that quest, the band lives up to the ideals that their name sets forth.

The Bridge is currently available. For more information, visit letterkills.com.