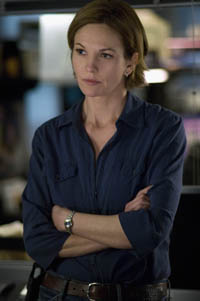 Diane Lane burst onto the scene with her highly praised performance in 1979’s A Little Romance opposite Sir Laurence Olivier. Though her career quieted down in the following years, she has proven her talent once again with her roles in The Perfect Storm and Award© for her work opposite Richard Gere in Unfaithful.

In her latest film, Untraceable, Lane’s bright talent shines through some very dark subject matter. Portraying Jennifer Marsh, a leader in the fight against online crime, she anonymously surfs the Internet daily looking for the worst offenders in hopes of shutting them down. She thinks she has seen it all – and she has, until now.

A disturbed young man (Joseph Cross) takes murder into the tech age by killing victims online and streaming the video live. Every cyber-gawker that logs on to watch becomes an accomplice as each hit makes the murdering mechanism happen more quickly and violently. Things soon become personal as Marsh dives into a thrilling race against time to find the killer before he can strike again.

Untraceable reveals interesting aspects of today’s society and our fascination with things that are disturbing. In researching the role, Lane spent time with an FBI agent in Portland, on which Marsh’s character is loosely based.

“I sat with my gal, as I called her very endearingly, and we went through some things online, and within five minutes things were occurring that I wish I hadn’t seen,” says Lane.

“This is the thing: There’s an appetite that certain people have to see certain things, and it will always exist.

“I was so naïve I didn’t even know until about five years ago that computer viruses didn’t just spontaneously occur in nature like viruses do, but that they were created by people who have nothing better to do with their techno-fabulousness than sit around and inflict harm on everybody. It’s like arson, but with a big I.Q. I don’t understand. I can’t wrap my brain around that.”

Unlike most action thrillers, Untraceable has a woman as the hero and leading force fighting the bad guy.

“It’s not typically something that people would associate me with necessarily,” Lane offers when asked how it felt to play Marsh, “but I was happy to play the good guy coming up against the bad guy and definitely by the time we actually get to him, I’m glad it’s me, because it would be good to eliminate somebody like that [from doing] what they’re doing.”

Lane also portrays a parent in the film, and coincidentally, is a mother in real life. The events that occur in the film pushed her to consider what her children are exposed to on a daily basis.

“Yeah, there’s nothing scarier I think about being a modern parent than the invention of that alternate universe that young people today feel is theirs and they’re entitled to it, at any time of the day, all day long with their thumbs going [gestures as though she’s sending a text message], and if you can even make eye contact with a young person it’s pretty impressive.

“I understand the whole commodity of innocence and how much [of a] lack of it there is available in terms of what’s offered for kids online, but you know it’s the real world, they’re going to grow up, they’re going to inherit this world and I think it’s a cautionary tale.”

“To even have a film that deals with something like this that could happen gets that kind of conversation going, and I think it’s good because it is sort of a shocking reality check of all these elements combining in a certain way that is scary. That’s the point of the movie, and if you like being scared, I recommend seeing the movie.”