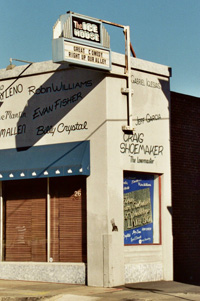 Pasadena is not a classic party town. It’s certainly not an epicenter of sophisticates, populated by colonies of starving artists and cognac-swirling connoisseurs. It is much what it touts itself to be: a city that feels like a village.

The city is primarily known for its place at the head of West Coast college football. The Rose Bowl and its associated parade are probably the first thing anybody thinks of when they hear Pasadena’s name, but that’s hardly a fair summary of the city. Even in this part of the world, there’s more to life than college football.

Pasadena’s biggest attraction is Old Town, a 22-block district just off highway 134 that sports over 200 specialty boutiques and food establishments. It’s the perfect place for a pleasant stroll up the promenade with a cup of coffee and a desire to empty your purse on high-end clothing or home décor. Beyond a draw for out-of-towners, Old Town is a gathering spot for Pasadena locals, especially young people.

Pasadena is home to the Ice House, a music and comedy club that’s been hot since the 1960s and has seen performances by Steve Martin and Robin Williams. The Ice House not only serves up great shows and artists, it doesn’t exclude the young’ins, meaning 18 and over are welcome.

Keeping with the stage, another stop on the city tour is the Pasadena Playhouse, the official state theater of California. Originally built in 1917, it was so dubbed for being the first theater in the country to perform the entire Shakespeare canon. Today it hosts shows with big name actors like Laurence Fishburne and Angela Bassett, who both starred in the play “Fences.”

If movies are more your style, Pasadena offers a few small time theaters such as Laemmle’s Playhouse 7, which shows the indie flicks that larger establishments normally turn up their noses at. With discounted student tickets of $8.50, it’s one of the slightly cheaper excursions in the area.

Pasadena is also a launch pad to the great outdoors. Nearby, at both Griffith Park and the Mt. Wilson Observatory, visitors with a penchant for wild excursions can find themselves in the heart of California’s greatest natural treasures. Take the dogs out for a much-needed romp in the best stretch of park that SoCal has to offer.

Now to the grub. Whether you’re looking for a high-class meal, a celebrity-studded evening or a quick greasy bite, we’ve got the restaurants for you.

For the legal crowd, we offer up McMurphy’s Restaurant and Tavern and the Old Towne Pub. McMurphy’s is an essential part of the local nightlife, especially since its happy hour offers $2 pints (and has Anchor Steam on tap). It’s a classic pub environment – a great place to hang out and get a beer, a casual dinner and some decent music performances.

Old Towne Pub has a strong emphasis on live music and offers a great sense of community. It’s the kind of place you'd show up to when you want to leave your good shirt at home and put your feet up to the tunes of whatever band they’ve procured (live music every night!).

Another place you might want to try your hand at is Madre’s. This restaurant, owned by Latina diva Jennifer Lopez, screams Puerto Rico from the traditional foods to the cigar box-shaped menus. Although it’s a little pricey for any old weeknight, Madre’s is family friendly and an excellent place to impress a first date.

There is no mention of Pasadena that’s complete without talking about Rick’s Drive-In (680 E. Walnut St.). A greasy spoon to the extreme, Rick’s specializes in a delight called “The Spuderito.” Get this: a burrito with all the fixings, plus an extra helping of French fries and chili all rolled together in one heart attack on a plate that’ll send you to heaven with a smile.

Hey, we only live once.

Pasadena is a low-key place to find a great time. From theater to food, you’re certain to find something that tickles your fancy.