Envy on the Coast: Living Up to Their Namesake 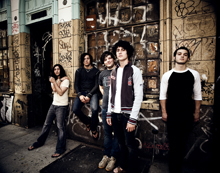 Long Island has claim to many great things in culture and history, none of which you’re likely to legitimately care about nor are we about to try and sift through. Instead, Envy on the Coast guitarist Brian Byrne recalls the early days of his band’s formation for what really sets his home state apart.

“Dan [Gluszak] and Ryan [Hunter] both dated the same girl at different times, which was kind of a weird thing when Dan was coming into the band,” he says of his drummer and vocalist, respectively. “But that’s very typical of Long Island band formation. I think every band from Long Island has two members who have shared. It happens. It’s a fucking island, how many people can there possibly be?”

Snarky and sarcastic as he may be, Byrne and his band, rounded out by guitarist and pianist Sal Bossio and bassist Jeremy Velardi, take their music seriously and appreciate the importance of longevity and integrity as musicians.

Byrne is humble and unpresumptuous of what’s to come for his band, but Envy has already seen a surge in their popularity since their recent emergence from obscurity.

“I’ve never really thought of us as that type of band, but music changes, and as history has shown, sometimes bands that aren’t the poppiest band can blow up,” he says. “If that was us, that would be great because it would mean that we did something that not a lot of people can do.”

Though he carries a confidence that sometimes borders on being flippant, there is the side of Byrne that is stoked on what is to potentially to come for his band.

“I never really thought about being in a band until I was in a band. It just kind of happened,” he says. “I was always intrigued by guitars, but what attracted me to music was that you really can do whatever you want. Sometimes that freedom can be overwhelming, but I’ve started to embrace that.”

Though they may still be a ways from realizing that potential to its fullest, these Long Island boys have the passion and work ethic that just might make them worthy of their namesake.

Envy on the Coast will perform Jan. 29 at the Knitting Factory. For more information, visit www.envyonthecoast.com.