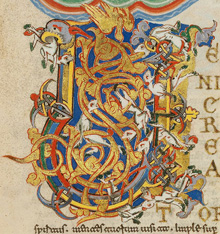 Attempts to decorate the “A” that began this sentence were met with my stolen copy of Microsoft Word 2007 freezing up, crashing and an unfortunate incident involving the font “Ravie.” I refused to use any font christened “Quigley Wiggly” or any name cuter than the font itself.

Do we really need 99 percent of the fonts offered by Word? They look like the decorated letters found in the passed notes of an 11-year-old schoolgirl, with their frilly circles and bubble lettering.

Like the bubonic plague, medieval society knew how to pull off the decorated letter. The Getty’s latest exhibition, a tangent to their earlier Illuminated Manuscripts, showcases the pages of medieval manuscripts where foliage, fauna and the rest of the categories of 20 Questions inhabit the inaugural majuscule.

In a breviary (prayer book of the Catholic Church) the letter V is made of a rainbow arc from heaven and a descending dove symbolizing the Pentecostal arrival of the Holy Spirit. Gold leaf vines and purple flowers complete this textual pantheon to God, which begins the hymn sung to commemorate the Holy Spirit’s visitation of the apostles.

Historiated Letters showcase an entire scene from the adjacent text or a portrait of the artist; an N may sketch out King James I of Aragon bearing witness to his court while a judge listens to a group of lawyers. Which is what the “A” that began this piece will resemble once Microsoft’s lawyers found out how I got this copy of Word.