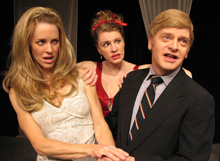 In the future, the only plays allowed to be performed are stories from the Bible. However, Dexter brings Alice a manuscript, a lost play entitled “Post Mortem.”

The subversive, un-produced play is written by an “obscure” American playwright, A. R. Gurney (The self-deprecating author pencils himself into the plot). In the story, the author has died several years ago, perhaps a victim of foul play, or perhaps he died a more mundane death.

Gurney breaks the mousetrap mold; the actors may be performing the play-within-the-play, or they may be in their own reality acting out events that eventually become the basis of the play. It’s unclear, but it’s fascinating.

The second act bursts into life with the addition of a third character. Betsy (marvelously played by Andrea Syglowski) introduces Dexter and Alice to the stage.

The lecturer and student are now famous authors and actors of the now world renowned play “Post Mortem.” Before she introduces the duo to the stage, Betsy has a chaotic rant on cell phone usage that is deliciously over-the-top. Her performance is dynamic and hilarious. “Post Mortem” is an allegory about the death of American culture at the hands of Christian Fundamentalists. Moreover, it’s an amusing and thought-provoking work.

The Lyric Hyperion Theatre is located at 2106 Hyperion Avenue in Silver Lake. For tickets, visit www.tix.com.