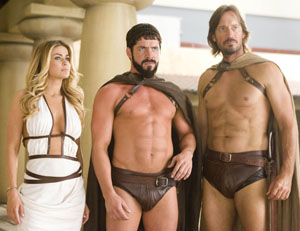 Nowadays, it’s not enough to be a pretty face in Hollywood. People want their celebrities to come with accompanying singing abilities, immaculate acting chops and a little something extra (i.e. fierce dance moves, endorsement deals, insane fashion know-how). Lucky for Carmen Electra, she’s got them all.

This multi-talented entertainer was born Tara Leigh Patrick in Sharonville, Ohio – a suburb of Cincinnati. As an early devotee of dance, she started taking lessons at a small-town studio.

The glare of the spotlight later beckoned, and it was off to Los Angeles to put her skills to good use. While on the West Coast, Patrick became romantically linked to enigmatic pop-star Prince. His purple greatness took the young novice under his wing – convincing her to move from the traditional Irish name she was given at birth to a much flashier Latin-inspired moniker.

Electra collaborated with Prince on her 1992 self-titled debut, but the venture was a dull flop. However, the coinciding music videos released, like “Go-Go Dancer” and “Everybody Get On Up,” featured the minimally clad pop starlet in all her pouty, shimmying glory.

In a town where anything can happen, the singer-dancer linked up with ’90s cholo extraordinaire B-Real from the rap group, Cypress Hill. Their relationship lasted for roughly three years and produced another welcome addition to Electra’s “body” of work: her buxom enhancements (an admission made on “The Howard Stern Show”).

Heavy-hitters renewed interest in Electra after a 1996 Playboy magazine cover. She would go on to achieve success on MTV’s “Singled Out” and also on “Baywatch.”

Electra’s personal life also got flashier with her widely publicized marriages to pro-basketball wild child Dennis Rodman and later with neo Glam-rock guitarist and radio personality Dave Navarro, with whom she starred in a 2004 MTV reality show (“’Til Death Do Us Part: Carmen & Dave”). In 2007, there were even rumors of an alleged affair with 1980s chart-topper, Joan Jett (a relationship that both deny).

In recent years, Electra’s been “Punk’d,” interviewed by widely-praised media talents like Conan O’Brien and Ellen DeGeneres, gone on tour with the Pussycat Dolls, created a lucrative series of striptease aerobic videos and has woven for herself a successful stint as a pop culture icon.

She puts her skills to use in her latest film effort, Meet the Spartans. The comedy is another rib-tickling spoof based on previously released blockbuster features.

Spartans is a send-up of the 2007 epic hit, 300 (starring Gerard Butler). The project marries the traditions of ancient Sparta with obvious and beloved nods to modern-day references and humor.

In this fictitious adaptation of the well-known ancient world, Leonidas’ troop of 300 brave warriors has also been hilariously reduced to 13 fighters. Men and women greet each other with a special handshake. There are characters based on bad girls like Paris Hilton and Lindsay Lohan. Even the game show “Deal or No Deal” gets a shout-out.

Spartans’ filmmakers, Jason Friedberg and Aaron Seltzer, were quick to recognize the aesthetic appeal and talent in Electra. And they would know: These moviemakers were two of the writers on the Scary Movie franchise and helmed 2006’s Date Movie as well as 2007’s Epic Movie. According to the duo, she shares their sensibilities.

“I’m always attracted to doing parodies,” Electra says about her role as Leonidas’ wife, Queen Margo, “and especially to Jason and Aaron’s specific brand of humor.”

“Their films are a lot of fun to make. I love to go to work every day and laugh, get to do all this silly stuff and even make fun of myself,” she admits.

That sentiment is echoed by Friedberg.

“It’s fun to play off a role in which one of our actors is closely identified,” he says. “For example, Kal Penn in Epic Movie has a line of dialogue pointing to his character’s familiarity with White Castle.

“There’s a line in Meet the Spartans where Kevin Sorbo says, ‘I’m going to go Hercules on your ass.’ It’s a bit of a wink, but it’s fun. And we like to occasionally include stuff like that.”

For the filmmakers, one of the biggest challenges to the production would be replicating the look of 300 but doing so on a significantly less grandiose budget. Electra’s timeless and exotic looks were a definite plus in the right direction, but there would be other logistical issues at stake.

Many sight gags were created on various New Orleans soundstages. Special effects makeup would also be heavily used. Matthew Mungle was given the challenging task of working his cosmetic magic on Spartans’ myriad look-alike actors. For the production, he and his team painted abs on the buff warriors and also gave a helping hand to the faces of actors portraying characters like Rocky Balboa.

Playing Electra’s love interest in this latest parody is actor Sean Maguire. Audiences may remember him as Kyle Lendo on CBS’s short-lived sitcom “The Class.”

As the Gerard Butler character, he has the daunting task of holding enough girth to stand out against his attractive costar. Fortunately for this stage and screen star, his leading lady has a reputation for being a real pro and generous actor on the set.

Her Spartans bosses keep coming back to her for a reason. For industry-watchers, that interest is somewhat predicated on her easy-going nature.

When beauty giant Max Factor chose Electra as the face for its brand in 2005, the endorsement deal seemed an obvious choice. But it wasn’t until her notorious slip-and-fall during a fashion show sponsored by the company that people got to see the true grace and refinement lurking within the actress. While many women would have run screaming from the room, Electra took the fall in stride, quickly accepting the hand of a helper, thanking him for his assistance and waving graciously to the stunned audience.

Her tenacity and roll-with-the-punches style is not necessarily commonplace in Tinseltown. Therefore, to have witnessed it in a woman with such abounding sex appeal is a real gift.

Electra’s future is steeped in forward momentum. Spokesperson deals with NV dietary supplement, along with Seltzer and Friedberg’s interest in her outstanding wit, almost certainly ensure a long-lasting career in entertainment.

And who knows ... maybe after realizing success in front of the screen, she may decide to go the route of contemporaries like Drew Barrymore and Reese Witherspoon – producing the projects in which she stars. Because as experience has shown this small-town girl turned big name star, opportunity is almost certainly waiting, just around the corner.