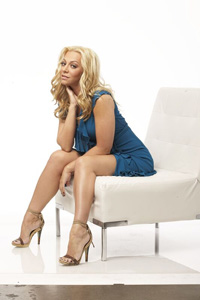 Melissa Bacelar – a woman unlike the killer vixens she plays onscreen – embraces everything about the horror genre, which she’s best known for, including the fans that flock to meet her at conventions.

“Hooker zombies that kill people, that’s the kind of roles I play,” Bacelar laughs. “And I’m OK with it. Indie filmmakers who produce horror films do it out of love. They are so dedicated and no matter how big I get, I will always find time to do a few lines for them. It’s fun playing evil.”

Melissa has come a long way since her humble beginnings in Piscataway, N.J., where she spent 12 years in Catholic school. Her first stab at the horror genre was in Troma Studios’ Citizen Toxie: The Toxic Avenger IV (2000), which screened at the Cannes Film Festival.

Other credits include Addiction, This Thing of Ours and the award-winning Strange Things Happen at Sundown. She recently wrapped parts in Hotel California, Pink Eye and Columbus Day.

For her latest project, Eat Your Heart Out (which appeared at the 2007 Spooky Film Festival), Bacelar not only starred in, but also executive produced the film, which will be released in early 2008.

She can currently be seen on “Hollywood Residential,” the Starz series produced by Cheryl Hines (“Curb Your Enthusiasm”), where she plays Scarlett Jo Ramson. But her first love is the horror genre, and her fans.

“I answer all my e-mails, so e-mail me, give me feedback and don’t be afraid to come up and say hello at the horror conventions,” Bacelar exclaims.