Margaret Cho: This All-American Girl Is Ready to Sink Down to Your Level 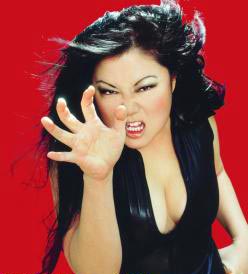 Recently returned from the Canadian leg of her Revolution tour, Margaret Cho got more attention than she bargained for on the streets of Toronto. A few uber-paranoid Canadians immediately covered their faces with surgical masks at the sight of Korean-American Cho, not because she looked sickly or coughed up chunks of lung, but because she’s Asian and therefore capable of carrying the deadly SARS virus. Naturally, discrimination does not sit well with the Notorious Cho and she dealt with it in the only way one would expect her to.

"I stopped right in front of them, collapsed to the ground and started coughing dramatically. I tried to reach over to touch one of them, yelping ‘Help me!’ and they were flipping out," she says gleefully. Cho explains her experience with such down-to-earth realness and super-consciousness that somehow, merely laughing in response seemed trivial. "It was hilarious because they were just so scared of my reaction. My touring group and I were dying laughing. Like, fuck those guys! Who do they think they are? I don’t have SARS just because I’m Asian!"

Self-redemption through the healing hands of comedy is a formula that has gotten her adulation, profound respect and a hardcore cult following from minority groups everywhere. "Most people would say to just walk away and not to sink to their level and I’m like ‘No, I am going to sink down to their level’ ‘cause that’s funny and you know what? They’re not going to do that to someone else because they realized I was fucking with them after some time and of course they were busted."

And there it was. The core, the key element and the very reason she tossed her body to the floor in dramatic mockery in front of complete strangers, causing a scene that was just too good to pass up. But beyond that, she provoked an unconventional lesson to the ignorant through brutal comedy.

Margaret Cho is hardly a self-righteous prick or a loud-mouthed bitch. She’s actually extremely sweet and even a bit shy at first but deep inside is a real fighter for justice who demands total equality and nothing less. She knows the struggle of the minority all too well——as an Asian-American woman in the entertainment industry and a most liberated and adored "fag hag" who’s been raised by strict Korean parents and leather daddies——and can no longer remain silent. She voices her concern for gays in the military and humorously-yet-lovingly concludes, "you cannot win a war without lesbians" so the least a country can do is face their own class war and respect their own soldiers. But when that’s not the case, the only solution is to look within and take control of your own. "The show is about a lot of things but mainly about real revolution that occurs within and has nothing to do with everybody else’s revolution but your own personal revolution of the way you live your life."

Cho has survived personal obstacles as revealed in her confessional stand-up movie I’m The One That I Want, progressed as a socially relevant entertainer in the raunchy Notorious C.H.O. and now wants to challenge her fans to choose and face the hell out of your own battles with her new uncensored on-the-road show called Revolution, for which Cho provided an amusing Cho-Guevera logo for as a promotional asset. Her new material tackles race issues and on a lighter note, the joy of bodily functions, her loser ex-boyfriend and of course, more impersonations of her Konglish speaking mother who brought us "Ass Master."

This once-lost-now-found, self-proclaimed "shit starter" is utterly content and emanates a rare positive energy that just overflows once tapped into. To define Margaret Cho as "funny" is simply an understatement and to call her a "bitch" definitely misses the point. But as self-assured as she is, Cho just does not give a flying fuck and she’ll sink down to your level to show you just that.