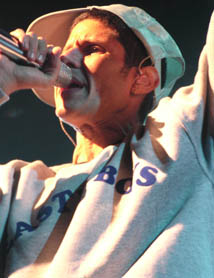 Mixmaster Mike kicked off the show, rallying screams for the already hyped up Beastie Boys crowd, scratching and laying down beats for the trio known as Adrock, MCA and Mike D. The boys came onstage with their quick rhymes and rhythms in celebration of their first album in six years, To The 5 Boroughs.

The Beastie Boys "got ill" by singing a tirade of songs including "Triple Threat" and "An Open Letter to NYC" off Boroughs, along with old school favorites such as "Paul Revere" from Licensed To Ill and "Egg Man" from Paul’s Boutique.

In the middle of the set, the B Boys rolled out in cheesy, light blue tuxedos, playing instruments as part of a rhythm and percussion band. This funky instrumental solo went on far too long as the crowd sat down for a rest. However, the Beastie Boys closed strong with "Ch-Check It Out," before coming back for a rousing encore, racing up to the top balcony to sing "Intergalactic" and then running back onstage to finish with "Sabotage."

Opener Talib Kweli, joined by special guests Mos Def and Common Sense, brought street rhymes and positive vibes to the show. Kweli rapped behind old school tunes such as Michael Jackson’s "Don’t Stop ‘Til You Get Enough," finishing the set with "I Try," the single off his upcoming album The Beautiful Struggle.