The League of Extraordinary Gentlemen: The Black Dossier: (DC) 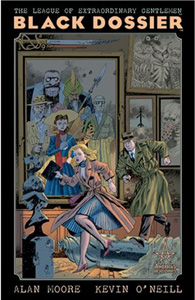 Alan Moore’s ode to 19th century adventure stories returns in its third volume. Unfortunately, The Black Dossier has none of the charm or verve of the first two installments.

Moore wrote himself into a corner in the previous installment, Volume II, killing off most of the league’s characters. Dossier gets bogged down in unreadable, daunting facsimiles of historical documents – a recurring Moore device previously used in the series as fun supplemental material. The documents included here, which make up the titular dossier, summarize subsequent attempts at forming leagues.

Any of these stories would have made for a more interesting comic book. Moore instead uses them as a device to travel ahead to Post-World War II Britain, abandoning the original concept for the comic. Although this affords the possibility of exploring the world of Cold War espionage (a young James Bond appears as a bumbling, wholly unlikable womanizer), the story is the worse for it.

Moore is either trying very hard to reinvent the comic medium (again), or is completely bored with the form, all but abandoning visual storytelling. The actual comic panels amount to lifeless filler material full of expository dialogue. Kevin O’Neill’s atmospheric artwork is wasted, as he is given nothing to work with.

One nice experiment, including 3D glasses for the final segment of the book, is completely undercut by pages of distracting chatter. Aside from a few fun references to The Third Man and The 39 Steps, this is a lifeless work that forgets what made the series great in the first place. The whole thing is one giant misfire.

The League of Extraordinary Gentlemen: The Black Dossier is currently available.