The Air I Breathe: How to Avoid a Mob Boss Named Fingers 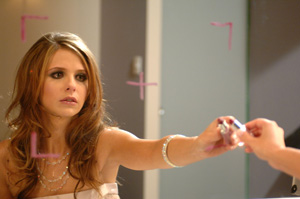 Happiness, pleasure, sorrow and love. These core emotions are explored as human personifications in director Jieho Lee’s first feature film, The Air I Breathe. The film, which Jieho both co-wrote and directed, stars Forest Whitaker as Happiness, Brendan Fraser as Pleasure, Kevin Bacon as Love and Sarah Michelle Gellar as Sorrow.

“The inspiration comes from my journey as an Asian American,” Lee explains. “Really as any minority American you’re born into a bi-moral world. On one hand you have the American culture which touts the beauty of the individual and the power you get from being a unique person, and on the other side is my Asian heritage which touts the beauty of the collective and the completeness you get from being a part of the whole.

“So, on the one hand you have this story, which is greatly inspired by The Wizard of Oz, which is a journey of four individuals trying to find out who they really are. Then on the other there is this Asian belief that we are all connected through four emotions; happiness, pleasure, sorrow and love. Actually, the last one is anger, not love, but I took some artistic liberty there.”

Four interconnected vignettes focus on each member of this incredible ensemble cast, who all end up helping Sorrow (Gellar) escape her tormented life as a pop star obligated to work after her manager is forced to give her contract to Fingers, the local mob boss played wonderfully by Andy Garcia, in order to avoid learning why he has earned such a nickname.

Gellar was the first to be cast by Lee, and while some actors might be wary of working with a first-time director, Gellar wasn’t.

“[The script] read like poetry to me,” she says. “It was so different from anything I had ever read. I had such faith in who Jieho was and what the story was that it was easy to make that decision.”

Gellar thoroughly enjoyed her experience working with both Lee and her ensemble cast. “Those are the caliber of actors that you hope you get to work with,” she explains. “When Andy Garcia stands in front of you and waves a gun and screams at you, you’re petrified! There’s no acting involved!”

Fraser plays Gellar’s love interest in the film as well as a hit man for Fingers. Fraser’s character is dark but has glimmers of a lighter side, something that attracted Fraser to the role.

“The character was a very dark character that I felt would be interesting to try to get to know,” tells Garcia. “He’s a fairly unredeemable character, and I like that about him. I was stimulated by him.”

Yet perhaps Fingers himself is also suffering through these four emotions, just like the others.

“I think at the tip of the pyramid is always love,” Garcia explains. “Everyone is always in search of, in need of, obsessed with, in lack of, in abundance of … love.”

Lee has created a unique script and attracted many award-winning actors to The Air I Breathe. Through it all Lee learned what it takes to get the job done well, something he will no doubt take with him to future projects.

“I feel very lucky, very blessed,” he starts, “but at the same time I went through so much pain to get here. I don’t think that anybody who’s in it for the glory is going to get it unless they’re born into it. Because it is such a difficult, difficult road.”

“The audience is able to sit back and look at this and have a sort of philosophical experience along with the highly kinetic and interesting and dangerous and sexy and ocularly stimulating experience of watching this movie. And it’s got a pretty kickin’ soundtrack, too!”

The Air I Breathe releases in select theaters Jan. 25.