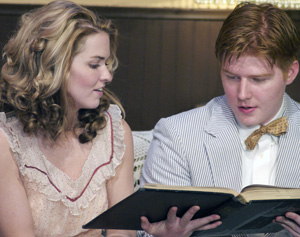 Pulitzer Prize-winning dramatist and Oscar-winning screenwriter Horton Foote examines small town life in “Harrison, Texas,” a loose collection of plays comprised of three one-acts: “The Midnight Caller,” “Blind Date” and “The One-Armed Man.” The only common thread is the location – the tiny town of Harrison (based on Foote’s hometown of Wharton, Texas).

The United States is dotted with small bucolic communities just like Harrison. Not a lot happens in these quaint bedroom communities, nor does much happen in Foote’s plays.

“Midnight Caller” is a quaint comedy/drama about a woman (an exquisite Elizabeth Carlson) who moves into a boarding house to escape her oppressive mother and an alcoholic suitor. The ex (Alan Savanapridi) comes stumbling back into her life on his eponymous midnight benders. It’s the most interesting and provocative of the plays, and the cast is excellent.

“Blind Date” is more of a long form sketch comedy than a one-act play. It’s a humorous look at an aunt (an excellent Laura Richardson) trying to find a suitor for her unruly niece, Sarah Nancy (a delightfully comic Sarah Schaub).

“The One Armed Man” is the apple that spoils the bunch. It is a dirge about class.

The titular one-armed man (Savanapridi) breaks into the office of the cotton mill and confronts his blowhard boss, C.W. Rowe (John Blevins). The one-armed man sets out to retrieve his lost limb severed from an accident months earlier.

Obviously, there is no arm to retrieve. He rants and screams repetitively “Whar’s ma arm? Gimme back ma arm.” Several audience members suppressed inappropriate laughter as the scene dragged on.

With marvelous theater all over town, “Harrison, Texas” is a mediocre destination.