The Henry Clay People: I’m rhythm guitar, you’re lead guitar, let’s do it like the Beatles. 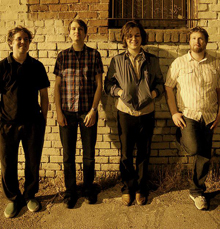 If you start recognizing a theme throughout a band’s interview history, avoiding that theme gets a little difficult when it’s your turn. So it’s a struggle to get answers out of Joey Siara without bringing up terms like “impending sense of doom” and “self-deprecation.”

The Henry Clay People front man is at once polite and well-mannered, open about his clumsiness and shortcomings, and sure enough, self-deprecating. To a degree, he’s also willing to discuss the shortcomings of his band mates – in particular, those of his brother Andy, a UC Irvine senior who, as big brother sees fit, “will be in a band [with me] when we’re 40 and playing in shitty dive bars.

“My brother kind of worships Television. He’s really big into the Tom Verlaine/Richard Lloyd noodly stuff, but he’s really lazy, so I think when he learns these songs he only half-learns them, and that extra half he doesn’t learn has actually been an asset to us. Keeps it raw. But he’s not terribly good at getting a rhythm guitar sound. Used to be that I’d play a little lead guitar, my brother would play a little lead guitar. But now I’m just like, ‘OK, I’m rhythm guitar, you’re lead guitar, let’s do it like the Beatles.’ Except we’re not good.”

But the majority of Siara’s backhanded comments are directed at himself, and in two hours time, he makes himself the focus of approximately 17 put-downs. He apologizes repeatedly for rambling, and for wasting my tape on his repetition of “eh.”

He bleeds humility, and it’s unexpectedly charming – it’s what you don’t see when he’s leading the Henry Clay People on stage, throwing kicks, pointing fingers, drunkenly talk-singing and living out a rock star fantasy on the floor. Then again, there’s also that clumsiness, and his voice gets noticeably softer when he brings up his “motor skills,” the reason he’s fallen off several stages in the last year.

Currently, Siara and bassist Noah Green live in Glendale, while Andy Siara and drummer Eric Scott, a full-time architect, are based in Irvine. They are not, as has been suggested, Canadian.

They are, however, reminiscent of everything that made ’90s alternative rock refreshing, shameless rock ’n’ roll energy minus the exuberant masculinity. They’ve been lyrically transitioning from clever historical references to personal tales of financial woe, and musically, could stand centered on a Venn diagram surrounded by Pavement, Hammer No More the Fingers and the Hold Steady.

I ask Siara whose work he wishes he could take credit for, and surprisingly, he names In an Aeroplane Over the Sea by Neutral Milk Hotel.

“That record floors me. [Jeff Mangum] has a voice that can make all the hairs on my arm stick up. I don’t have the kind of voice that could raise hairs on arms.”

He also regrets that the band’s first record offered more in ambition than satisfactory songwriting, and hates that “Elly and the Eczema Princess” (from last year’s Blacklist the Kid with the Red Moustache) is repeatedly requested at shows, as he’s “not very good” at playing the song, which he calls “scattered.” He’s also too embarrassed to print out his lyrics per grandparents’ requests, and confides that he’s stolen CDs of his early music from friends’ cars, thinking, ‘I don’t want anybody ever hearing this, ever again.’

But there are a few things he ought to be proud of. He loves his Telecaster, choice instrument of his favorite guitarist, Joe Strummer, as well as Bruce Springsteen, who – yes – Siara actually refers to as the Boss. He mocks his own vocal limitations, but his clear, conversational enunciation works well for the band; the way he floats through the line “I just want to sail the tallest ship through the greenest seas” during “The Bandage on the Bloodclot” (Blacklist) is pure perfection.

I mention my love of “The Man in the Riverbed,” and he explains that its melancholy tone (somewhat reminiscent of Built to Spill’s “Carry the Zero,” mind you) is due to Green’s creation of its riff in E minor. Siara then thinks aloud that, yes, the group should start using more minor chords.

He also decides that once the band’s nearly run its course, he’d like its swan song to be an album of two-minute odes to Operation Ivy. Will his mates go for that sort of ending?

The Henry Clay People will perform at the Echo every Monday in February. Their new EP is called Working Part Time.