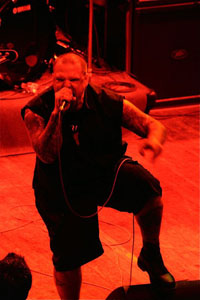 Years after the heart-pounding popularity of metal has faded into radio history, some things still remain. The soul of this machine may not be present on the radio anymore, but just because radio has gone corporate doesn’t mean that metal is gone.

In fact, metal is stronger than ever. All one would have to do is check out Exodus’ live show.

A packed House of Blues yielded a full house and one mean pit. The crowd was pumped up by Goatwhore and Arsis, but they weren’t ready for what was next.

The lights went down and the screen came up to reveal one pissed off band. They tore into a few classic songs and by the time the third was finished, frontman Rob Dukes was not having it.

He screamed at the crowd to get in the pit and step up. It was nice to see someone finally tell Hollywood how to handle a metal show.

As soon as he was done berating the audience, they ripped into some classic Exodus songs, and the pit erupted with sweaty bodies slamming into each other as the music intensified. The biggest attraction of this show wasn’t the pit, but the music.

These guys sounded as good as they did 15 years ago. Tough vocals, fast as hell drums and some of the best shredding on guitar that this town has seen in a long time.

Getting a chance to see a band like Exodus shows that people want hard music, and metal is still going strong. A lot of people felt that metal died when Pantera broke up, but they are far from correct. More and more metal bands are selling out venues while pop bands are struggling to put gas in their tour busses.