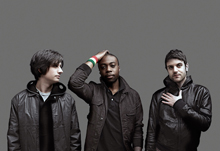 Fitting into numerous musical genres, including reggae, dub, soul, punk, rock and even dancehall, this Kingston trio is finding international success while resisting the temptation to target any one traditional music scene. And when I say Kingston, I mean Kingston, Ontario, not Kingston, Jamaica.

Their latest album, Street Gospels, boasts songs like “Walls Fall Down,” which uses multi-leveled lyrical themes that range from notions of human perception to subtle political jabs at a certain misguided leader of the nation just south of Canada.

Curious to know if this other Kingston is an unknown bastion of dreadlocks and ganja, I called up Bedouin Soundclash frontman Jay Malinowski for a Q & A.

When I read somewhere that Bedouin Soundclash was a Kingston trio, I was confused because I thought you were Canadian. Then I saw it was Kingston, Ontario. Is there a big reggae scene there or is it just a bizarre coincidence?

Some people like to say we’re from Kingston, but I’m from Vancouver and Eon (Sinclair, bass) and Pat (Pengelly, drums) are from Toronto.

[Jay, Eon and Pat all went to Queens University in Kingston, Ontario.]

How did you guys get into reggae?

I think it was different for all of us. I used to listen to a lot of punk and reggae; to me they were always synonymous. Everything I thought was cool was touched by a West Indies influence. When I met Eon and Pat it just kind of came together.

Has the band had any big obstacles that you’ve had to overcome in the past seven years since you’ve been together?

Nothing that any band hasn’t gone through. We see it as a great thing that we don’t really fit into a scene – not even the ska or reggae scene.

We’re not that traditional. I have no idea where we fit.

Has your label, SideOneDummy, been good about that? SideOne’s great because they kind of straddle a bunch of different hard-to-place scenes.

Yes. Flogging Molly play Irish music but are from California, so it’s a pretty confusing situation. But when you get down to it, if you really listen to their music, it’s just good.

Labeling has been difficult with us, too. We’re kids from Canada making reggae.

In 2004 your song “When the Night Feels My Song” from Sounding A Mosaic charted No. 1 on Canadian radio and No. 24 in the UK. Do you consider this your breakthrough song?

It definitely was our breakthrough song. I think it was just timing. It was summertime. People wanted it… it just started catching on. Then it started playing in London and got a really great response. You can’t really place why something does well.

Bedouin Soundclash was the main performance at the September 2006 Toronto rally calling for Canadian intervention in the Darfur crisis. Do you consider yourself politically active, and would you like to do more with your popularity?

I keep this in mind. I think we understand who we are as people, and that’s what gives us the ability to go and do those things. We like to think of ourselves as concerned citizens.

Do you feel a responsibility as an artist? Yeah, I think we’ve been given a huge gift to be able to play music for a living at this point in our lives. We always want to give back at least once a year, so we did this thing for Darfur mainly because at the time Darfur really wasn’t on any radar… we thought we could raise awareness about the situation by throwing a free concert.

While giving back to the community, Bedouin Soundclash also received the Juno award for “New Group of the Year” in 2006, and will be going on their first headlining tour at the end of January to support their latest album, Street Gospels, a pleasant mix of ethereal dub, soul and reggae, Canadian-style.