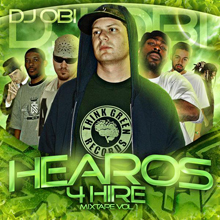 “Put on them hard hats, because it’s about to get dangerous, very dangerous.” Those words come from Obvious on the intro to this mix, “Waking up the Dead,” a sublime rhyme that also features commentary from Avatar, Meyer, Wolfsheim, Big Swish and Kaliban; a.k.a. Hearos 4 Hire.

Obvious isn’t issuing a warning of violence per se; on the contrary, he’s saying that it’s not easy to straighten shit out in this world. Thus we have Hearos 4 Hire, presenting themselves here as urban pied pipers ready to do the job.

“Operation Red Eye” is typically filled with expletives but there’s also a touch of nerdiness when Avatar rhymes Dixie Chicks with Pixie Sticks. These neo Wu-Tangers pass the mic around for the first 10 songs or so then wrap things up with some solo joints; Avatar spits on “A Man Possessed,” Obvious handles “It Don’t Stop” and Big Swish adds drama to “What He Claims” by using an ominous sounding bit of string section.

DJ Obi appears on two songs including “Sewaside” with Kaliban; otherwise he slyly inserts plugs for the record label and the group here and there.