Over Her Dead Body: Seeing Things From the Other Side 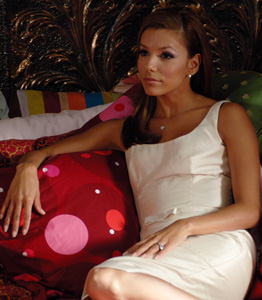 It’s hard enough to find that special someone and have to deal with a jealous ex. Imagine what it would be like if that ex had all of the powers of the supernatural realm at their disposal.

Caterer and would-be psychic Ashley (Lake Bell) and veterinarian Henry (Paul Rudd) are attracted to each other and would appear to make an unusual but happy couple. Not everyone agrees.

On Ashley’s side, there’s her friend and business partner, Dan (Jason Biggs), who has his own ideas about the guy she should be with. On Henry’s side, there is Kate (Eva Longoria Parker).

Kate is the ghost of Henry’s fiancé who passed away a year earlier. Ashley is the only one who can see her, and Kate pulls out all the stops to make sure that no other woman gets her man!

“I’m definitely a believer in spirits, especially angels,” explains Longoria Parker. “I feel we all have people taking care of us, and whether it’s someone you know in the past or just a guardian angel that God has sent you, I’ve definitely felt guided in my life by some angels.

“When I read the script I thought the ghost was the best character,” she continues. “She had all the fun stuff to do. She had all the physical comedy. You know ghosts [are] obviously limitless. You can do anything and I never played a ghost and I thought, ‘Oh what a fun time, to levitate and float and make noises.’”

Biggs’ take on the theme is more rational.

“I am a bit of a cynic,” he admits. “I am open-minded enough to be proven otherwise, but I’m a scientific guy. If I see a ghost or a psychic spews out a whole bunch of information that only she could know ’cause she’s a psychic, then you got me, I’m in, but that hasn’t happened.”

Believer or not, it doesn’t stop Biggs from giving his all when it comes to the physical comedy he has become known for. In one of the more elaborate gags he even has his arm set on fire.

“I love physical comedy, and I love sort of choreographing my own jokes and stuff,” he relays. “In any sort of scene like that I love coming in with the director and just sort of seeing what the objective of the scene is. I was like, ‘Yeah that’s gonna be me. I can do that. I’m Jason I’ll-do-anything-for-comedy Biggs.’”

Longoria Parker wasn’t as much of a fan of what was needed to film some of the physical effects, such as levitating and floating.

“It’s such a pain in the butt to shoot those days,” she confesses, “because of the wiring, and it’s such a safety thing and I’m like, ‘I’m only raising four feet off the ground and I think I’ll be fine.’ But it’s such a process doing those scenes and then they have to digitally erase the wires, so you can’t really change positions. My arms had to stay out. I couldn’t really do anything so it’s a little limiting in your acting, but when you see it, it looks great.”

The two performers obviously clicked despite their differences of opinions. So much so, that they have just finished a second project together.

In reference to finding out about being cast together again, Longoria Parker laughs, “It was fun. Jason and I were like ‘Yeah!’”

“It was great,” Biggs agrees.

“We didn’t get to work together much in Over Her Dead Body. I did two [scenes] with Eva, I guess. In the new one we got to work a lot with each other … and kiss,” he adds enthusiastically.

Over Her Dead Body releases in theaters Feb. 1.