Fool's Gold: Hudson and McConaughey Pair Up for Ocean Adventure 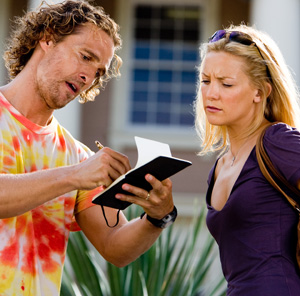 When Kate Hudson and Matthew McConaughey teamed up for the 2003 hit romantic comedy How to Lose a Guy in 10 Days, it seemed that a new dynamic duo was formed. America loves its iconic film partnerships: Humphrey Bogart and Lauren Bacall; Tom Hanks and Meg Ryan; Brad Pitt and Angelina Jolie; Jack Black and Kyle Gass. But from a Hollywood perspective, very few have managed to light up the screen in quite the same way as Hudson and McConaughey.

Banking on the notion that audiences will feel the same way, these two spirited actors have been paired up once again in the ocean adventure comedy Fool’s Gold. The film follows Finn (McConaughey) and Tess (Hudson) on the morning of their divorce.

Through wacky movie magic, fate reunites the couple and sends them off on a quest to find a historical aristocrat’s sunken fortune. Along the way they are chased by local gangster Bigg Bunny (The 40-Year-Old Virgin’s Kevin Hart), and they manage to make friends with a lonely billionaire named Nigel Honeycutt (Donald Sutherland) and his ditzy celebutante daughter, Gemma (Alexis Dziena). Fool’s Gold is a film that’s predicated solely on the interpersonal relationships of its characters. Both of its stars recognize the magic of their unique working relationship.

“Kate and I fight and flirt really well,” says McConaughey, smiling. “Chemistry is more about what goes on between the lines than what goes on during the lines and, for whatever reason, it seems to work between us. Kate has a special sparkle that’s very easy to be attracted to. She’s also very sharp and with great comedic timing, so it keeps the comedy buoyant, but with a little edge to it.”

Hudson returns the admiration for her costar.

“It was great to come into this and already have that comfort zone with Matthew,” she confesses. “I have a total soft spot for him. He’s so endearing; there’s really not a mean bone in his body. We can goof around and have a great time, but we also know how to push each other’s buttons perfectly. We both have a little bit of a competitive nature and throw little jabs at each other, which suited our characters and the dynamic of their relationship.”

Fool’s Gold director Andy Tennant is no stranger to making movies about men and women who challenge each other. His last relationship film was 2005’s surprise smash, Hitch (starring Will Smith and Eva Mendes). Tennant gets a thrill in watching those sparks fly.

He remarks, “We needed a couple that could spar; they had to be equally balanced so you’d know that each could give as good as he or she got.”

Aside from McConaughey’s and Hudson’s onscreen appeal is a storyline involving veteran actor Sutherland and virtual newcomer, Dziena. As estranged father and daughter, these talented performers allow their characters to work through some pretty trying familial issues. Their playful attempts at rekindling their alliance certainly pleased their director.

“[Alexis] has a real gift for comedy and is as sweet as they come. She was fun and funny and nailed the character, so it was an easy decision on my part to cast her.”

Dziena’s character is a bit of a sex bomb in Fool’s Gold. As a matter of fact, she’s taken many sexually suggestive roles in the past. Most moviegoers will remember her as the seductive and barely legal Lolita in Broken Flowers, opposite Bill Murray and Sharon Stone.

Her latest portrayal is also getting a lot of attention. Dziena struts through each scene in one outrageous outfit to another. For this trained actress, Gemma was the chance to let her hair down and do something fun.

“The challenge with this character was to make sure she was coming from a positive place and did not come off completely vain and one-dimensional. One of the things Andy and I talked about was her ‘Gemma-isms’ – the little things she comes up with that define her more than what was on the page. We also had a really fun time defining the character by the outfits she wears. She has very expensive taste, so I got to wear things I couldn’t afford to buy,” says Dziena.

Aside from the eye-candy delivered by the attractive cast, there is also the idyllic setting in which Fool’s Gold was shot. Port Douglas in Queensland, Australia adds the perfect backdrop to the jocular action sequences and balanced the drama of the love story.

“That beach is the only beach in the world where NASA gets its sand to make satellites,” beams Tennant. “That’s how fine the sand is. It’s like granulated sugar!”

But for all the beauty of a great location, filming was not without its issues. Two crew members were stung by deadly marine life. As a result, many in the cast were on guard around the frightening sea creatures lurking within the pristine waters.

“You never know what Mother Nature is going to do when you’re out in the middle of the ocean,” warns McConaughey. “As beautiful as the locations are, there is also danger, whether it’s the wind or the waves or those dreaded jellyfish. But there’s nothing you can do about it, so you just have to work with it.”

And work with it they did. Despite the long days and nights, Hudson and McConaughey had a great time on the shoot and with luck, film fans will see the two paired up yet again in the future.