The Eye: Jessica Alba Sets Her Sights on Scaring You 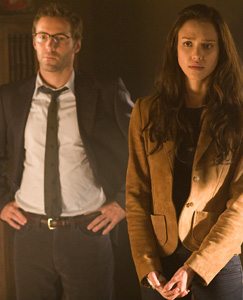 Jessica Alba is losing her mind. At least, that’s the case in the new thriller The Eye.

This effervescent star of the big and small screens aims to frighten in her latest role as a blind classical musician who gets a cornea transplant – and a lot of unwanted b.s. to go along with it. The transplanted tissue causes Sydney to see things that aren’t there and leads her on a path to investigating the donor that had her eyes before she did.

This heroine is worlds apart from Alba’s most recent contributions to moviemaking. Unlike the lighthearted klutz that she played in Good Luck Chuck, Sydney is a mature and independent young woman with a steely determination.

“I studied with this girl. Her name is Jessica. She’s a vocalist. She’s been blind since she was two,” she says.

Alba was blown away to discover that, in addition to an impressive professional resumé, her consultant of sorts was a world traveler and spoke three different languages. The 26-year-old actress also learned Braille and practiced walking with a cane to add authenticity to her performance. But it would be the violin – the cornerstone of her character’s day-to-day activities – that posed the highest level of difficulty in her preparation.

“The violin was definitely more challenging,” she confesses.

But in the end, Alba persevered, adding, “I really just worked my butt off and winged it as best as I could.”

Taking on the unenviable position of making a film within this genre work is a scary thing to carry on one’s shoulders. Some actors have done so with great success (Naomi Watts in The Ring) while others (like Kristen Bell in Pulse) have left a stinky footprint on Asia-to-U.S. horror remakes.

But Alba approached her turn as a fan. She is a scary movie zealot. While all the celebrity rags tag her as an “angel-faced mommy-to-be,” she’s also got a dangerous side percolating beneath the surface.

“The first Nightmare on Elm Street is definitely one of my favorites,” she exclaims.

Thrillers like Stephen King’s It and “doc-blocks” (back-to-back episodes of documentaries) on infamous serial killers get her blood going. She also praises serious films, like Made in America, a documentary produced by her fiancé (and father of her child) Cash Warren.

Alba was in attendance as it screened in 2008’s Sundance Film Festival. Having returned home from Park City, Utah’s unrestrained party atmosphere, this is one star that just wants to take some time off to relax and adjust to pregnancy.

“I’ve been nesting,” she says. “We have friends over once a week, and we play board games.”

Alessandro Nivola who plays Dr. Paul Faulkner in The Eye is charmed by his leading lady’s unpretentious nature. He and Alba met several times prior to shooting through his wife, actress Emily Mortimer (Lars and the Real Girl). He loves that his Eye costar “is kind of goofy and has this self-depricating sense of humor about herself.”

When asked what kind of mother she’ll be, Nivola takes a shot at himself, “She seems more prepared to have a kid than me, and I have a 4 year-old.”

About their cinematic “baby,” both actors are amazed by the filmmaking team of David Moreau and Xavier Palud.

“They’re French, and this is their second movie,” says Alba.

She applauds them for their unique vision in adapting this project for a new market.

Nivola enjoyed kicking up his heels with his bosses in between takes. For fun, he says, “We played bad Scorpions songs on the piano.”

As for any similarities between the characters they play in the film and their own lives, Alba discloses that she’s drawn to the strength in the ladies she chooses to encompass.

For Nivola’s role in The Eye, he admits only to sharing his character’s unflinching disbelief in ghostly matters.

“If my wife called me up tomorrow and said she’d seen a UFO, I’d put her in therapy.”

The Eye releases in theaters Feb. 1.