Superbowl XLII: Patriots and Giants Set to Rumble in the Desert 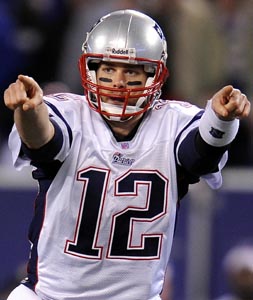 New England had to squeak out a victory in the season finale against the New York Giants to finish the regular season undefeated. Now, those same Giants stand in the way of the Patriots finishing the entire 2007-08 campaign undefeated.

On Feb. 3, the Patriots and Giants will kickoff Super Bowl XLII at University of Phoenix Stadium in Glendale, Ariz. New England is attempting to be the first team since the 1972 Miami Dolphins to finish an entire season undefeated while playing for its fourth Super Bowl win in six years.

The Giants are looking for their first Super Bowl victory since 1990 and third win overall. New York hopes to make history by handing the Patriots their first loss of the year and by giving quarterback Eli Manning the opportunity to be the first person to win a Super Bowl after his brother won it the year before.

Entering the game, the Patriots are currently 13-1/2 point favorites, though the Giants played them tough in the season finale, only losing by three points after dominating most of the game. Both teams took very distinct roads to the big game; let us take a brief look at how they got here.

The Giants were not expected to be here. They had the unenviable task of playing the Dallas Cowboys and the Green Bay Packers in the postseason – both teams were favored and expected to represent the National Football Conference in Super Bowl XLII.

With a 10-6 record, things did not look rosy early on. They lost the first two games of the season – ironically to the Cowboys and Packers. Then the season turned on a dime, with the Giants winning six straight – before losing to the Cowboys again and limping into the playoffs with a 4-3 finish, and a No. 5 seeding.

The Giants won and lost with Manning. In six losses, Manning threw for 1,467 yards, 12 touchdowns and nine interceptions.

Also helping the Giants is the fact that the game is not in East Rutherford, NJ. The Giants were 3-5 at home, but 7-1 on the road. All three playoff victories were on the road – at Tampa Bay, Dallas and Green Bay.

New York has a realistic chance to win, and should keep the game close at least through the third quarter.

The Patriots may be 18-0, yet they are far from perfect. While winning every regular season and playoff game leading up to Super Bowl XLII is no small feat, the Patriots did play in a weak division, where no team finished with a winning record.

That being said, what the Patriots did accomplish was second to none. They had quality victories over San Diego, Dallas, Indianapolis and Pittsburgh.

In 11 of their victories, the Patriots won by at least 21 points, while they scored at least 38 points in eight contests. Four games were decided by less than a touchdown – the same four games were won on a final scoring drive led by quarterback Tom Brady.

Brady threw for 50 touchdowns, surpassing Peyton Manning’s mark of 49 set in 2004. New England was also the highest scoring team in history with 589 points favored. Defensively, the Patriots only gave up 274 points, allowing less than 14 points in nine games.

In the playoffs, the Patriots handily disposed of the Jacksonville Jaguars. San Diego gave the Patriots a run for their money, yet New England prevented the Chargers from seeing the end zone the entire game. The Patriots have not given up a playoff touchdown since the 7:46 mark of the second quarter against Jacksonville – a stretch of 97 minutes, 46 seconds.

With the Patriots a defensive-minded team led by a smart quarterback, it is possible to see a defensive battle with little offensive fireworks. If the Patriots continue playing defense the way they have since the playoffs started, the Patriots will finish 19-0.