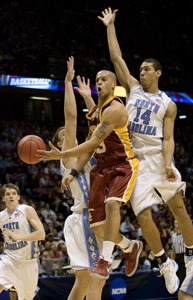 We are a little over halfway through this year’s NCAA basketball season, and the verdict from downtown Los Angeles is still in question. Is USC basketball finally showing signs of a new beginning, or is this season just another in the long and disappointing life of a basketball team at a football school?

While last season’s late tournament run and this year’s highly recruited freshman O.J. Mayo may have brought unreachable expectations to a young rebuilding team, the fact of the matter is that USC, under third-year coach Tim Floyd, is playing in the toughest conference in the country, and regardless of their opponent’s talent, they are playing very well. Even more impressive is how well they’re competing despite losing top players Nick Young and Gabe Pruitt to the NBA last season.

This season, Mayo has notched double-digit points in every game and has eclipsed 30 points twice this season while his freshman counterpart, Davon Jefferson, has been exceeding expectations and providing a strong and athletic presence at forward.

Sophomore guard Daniel Hackett has seen many of his stat numbers double this season as he has facilitated the Trojan offense through his passing, including 10 assist games in wins against South Carolina and then-ranked Southern Illinois.

Finally, sophomore forward Taj Gibson returned this season to become a leader both in the locker room and on the boards. While his numbers have gone down slightly this season, his presence and the attention he draws on the court have been enough to help his team get the open looks and second chances they have needed all season long.

It would be easy to compare the Trojans’ reliance on speed, talent and athleticism to that of the NBA’s Phoenix Suns and their “small ball rotation.” However, unlike Phoenix, the Trojans play a brand of defense that defies logic.

For a team that rarely puts anyone of noticeable height on the floor, USC is ranked 14th in the country and first in the Pac-10 in opponent’s field goal percentage. Early last month they held the undefeated and No. 1 ranked Memphis Tigers to a season low 37 percent from the field in USC’s overtime loss. They are also holding teams to 61 points a game while having only a single player, Taj Gibson, ranked in the top 100 for both blocks and rebounds.

The fear, however, that faces the USC program and its many fans is that this young team of underclassmen might not be in it for the long haul. Most NBA draft boards have Mayo and Jefferson going in the top 20 in next year’s draft, both ahead of UCLA’s strong freshman star Kevin Love.

The NBA’s new “One and Done” draft policy seems to have colleges around the country serving only as a modified minor league system where talented Pac-10 freshman like Mayo, Jefferson, Love and Arizona’s Jerryd Bayless will jump ship at the first flash of NBA cash. While UCLA and Arizona have always been strong programs, able to recruit and rebuild for the long run, USC’s focus on football has limited their ability to become the class of the Pac-10 basketball scene. The USC men’s basketball team has not won a share of the conference championship since 1985, and has not won an outright conference championship since 1961.

Now at 13-6, USC faces its toughest stretch this year. Five of their last 12 games this season come against ranked rivals from the Pac-10, including back-to-back games with top-10 Washington State and cross-town rival UCLA. They also face an underrated Arizona State team twice, a refreshed Arizona team twice, Washington’s Jon Brockman and an Oregon team that nearly beat UCLA last week, despite 26 points and 18 rebounds from Love.

The Trojans will need a good run through the rest of the regular season and the Pac-10 Tournament in order to make the tournament this season, but with the team finally gelling and their confidence higher than ever after beating UCLA and dismantling Oregon State, it seems less and less likely that Floyd’s talented young team of underclassmen will end up disappointing their strong fan base.

But truthfully, can any USC team that goes into Westwood and beats a fourth-ranked UCLA team on their home floor be a disappointment? The answer from USC fans is an emphatic no.