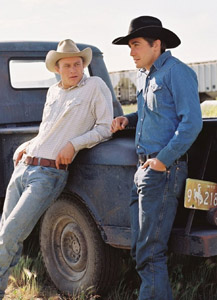 The press wires went ablaze. Gossip columnists made a spectacle of its details. News of it was uploaded to Blackberries everywhere: Heath Ledger, dead at 28.

It’s funny because we live in a world filled with cautionary tales and victims of excess. The recent death of troubled star Brad Renfro – while terrible and tragic – shocked nary a cynic.

But when faced with the realization that such a lively and commanding onscreen presence like Ledger could leave the world before he even turned 30 is a tough pill to swallow.

Ledger was the kind of actor who refused to be relegated to the average pretty boy roles. His career was filled with countless and unpretentious examinations of the human condition.

He was a gallant fighter striving to achieve an identity in 2001’s A Knight’s Tale. 2005’s Lords of Dogtown spotlighted him as a forefather within the modern world of extreme sports. And in Ang Lee’s controversial Brokeback Mountain, the actor demonstrated a breadth of sensitivity and pathos rarely seen from guys his age. So much that his performance of Ennis Del Mar won him his first and only Oscar nomination.

Recently, the Aussie actor lit up the big screen as one of the incarnations of Bob Dylan in Todd Haynes’ I’m Not There. Batman fans were just getting the chance to sink their teeth into the first images of his slithering and frightening performance as the Joker in the forthcoming, The Dark Knight.

But it’s not all the posh Hollywood legacy stuff that matters where Ledger is concerned. It is that he will truly be missed by those in his life. In his 28 years, he loved, lost, laughed and helped inspire a generation.

Ledger is survived by his mother, father, three sisters and two-year-old daughter, Matilda.

Special Features
Digital theater is all the rage, but could it destroy the live stage?
223 views