James Lafferty: “One Tree Hill” Star on Marriage, Fatherhood and Acting Your Age 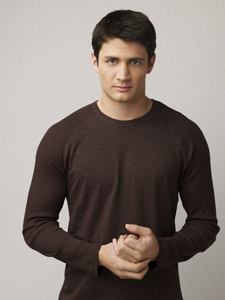 Most actors that play high school students on TV are roughly in their early- to mid-20s. James Lafferty, who plays Nathan Scott on CW’s “One Tree Hill,” is no different. But now that season is flashing forward four years, Lafferty finally gets to portray the highs and lows of his peers.

“It’s nice to play an adult, and to be appealing to an adult audience because we really know what our characters are going though,” says Lafferty.

With this newfound maturity of his character comes the need to try to understand issues he has yet to deal with, like marriage and fatherhood.

“I don’t have a perspective of what it’s like to be married and especially what it is like to have a son.”

To try and understand, Lafferty pulls from the people in his own life. However, playing the father figure to Jaime (actor Jackson Brundage) comes easily.

“When Jaime is hurt it really tugs on the heart strings, so I just imagine those feelings are exponential in real life.”

Although Lafferty may capture what it’s like to be a father, his character is far from the perfect dad. Scott struggles with alcohol abuse and has a tryst with the babysitter.

“Nathan puts himself in challenging positions, and to play that is challenging. So I go there and try and tap into those emotions. As an actor, that’s what we do, and that’s what makes it fun.”

As for Lafferty's personal life, he’s happy wrapping up his documentary about a little league basketball team, watching his hometown favorite team (the L.A. Lakers) and not hurrying to become a dad any time soon.