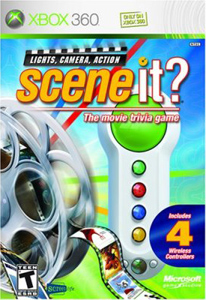 The following games don’t just make cheap date-night activities. They’re also enjoyable enough that you won’t catch hell for busting one out instead of a box of chocolates.

“SingStar” – Available in multiple flavors for the PlayStation 2 and PS3, this award-winning karaoke series lets you croon away to ’80s favorites or modern hits by U2, Alicia Keys and Ashlee Simpson. Two can team for duets or compete to caterwaul in time to onscreen prompts, making those attempts at glass-shattering falsettos equally fun whether you’ve hit the Boone’s too hard or are stone cold sober.

“Scene It? Lights, Camera, Action!” – Fancy yourself a die-hard movie buff? Prove it by competing to answer over 1,800 stumpers based on all-time favorite Hollywood flicks, with challenges featuring licensed sound/video clips and parodies of popular films. At the very least, even if she winds up whipping your sorry butt, you might learn a few suave pickup lines by playing.

“Dance Dance Revolution” – Pick a platform: From PS2 to Xbox 360 to Wii, each sports a version or another of this mega-popular, leg-shaking series. Requiring players to physically hop, twirl and stomp on a dance pad peripheral, it won’t just help you burn calories, but also break the ice – and possibly induce a hernia, just in case you’re striving for the sympathy vote.

“Rayman Raving Rabbids 2” – A catchy party game for one to four participants featuring dozens of minute-long, user-friendly challenges like washing clothes or shooting plungers at mutant bunnies that (hallelujah!) require no previous experience to enjoy. Because, hey, nothing says “love” like frothing cartoon lagomorphs.

Scott Steinberg is the author of free-to-download must-read Get Rich Playing Games (www.getrichgaming.com).