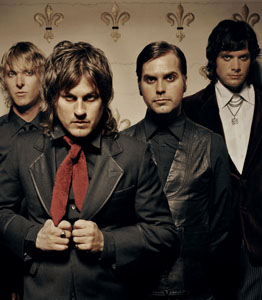 Looking like the Lost Boys hiding out in a haunted French château, the members of Louis XIV face the tumultuous music scene like fearless rock star vampires who have all the time in the world to spread their talent, but luckily for us have chosen this year to sink their musical teeth into our malnourished flesh to allow us to experience the visceral channeling of their audio euphoria.

It’s the beginning of 2008, and I’m not sure why we deserve such a gift as Louis XIV’s latest album, Slick Dogs and Ponies. We certainly haven’t earned it.

One has no choice but to conclude that Jason Hill (vocals/guitars/piano), Brian Karscig (vocals/guitars/piano), Mark Maigaard (drums) and James Armbrust (bass) are benevolent beings from another planet who have traveled across space and time to bring peace on earth through the glory of an album with a musical range that hasn’t been experienced since the ’70s.

“We’re not a band that makes singles,” Karscig tells. “We make records. We’re more like novel writers than short story writers. We like old Zeppelin albums where you want to listen to the entire album from start to finish – an intermission in the middle and flip the record.”

And that’s why Slick Dogs and Ponies might possibly be the best album we will have the good fortune to listen to in 2008. So many albums these days have only one or two radio hits on them that music fans have started buying individual songs from iTunes instead of going to the record store to experience a band’s latest newborn creation.

The range of Slick Dogs and Ponies from “Guilt By Association” to “Air Traffic Control” to “Misguided Sheep” is nothing less than inspirational. Each song is unique, yet at the same time complements the track behind it and ahead of it.

The journey to get to these 11 tracks was not easy. For 18 months they spent seven days a week in their own San Diego studio recording somewhere between 60-70 tracks.

“We recorded and recorded until we finally stumbled upon what we thought was a unique sound that isn’t really out there yet,” Karscig says. “The lineup of the album probably changed six times as well as the title.”

Concerned about the variety of sounds on the album, he asked himself, “Are people gonna hear a single and be bummed when they don’t hear anything else like it on the record?” The conclusion he came to, however, was that people are going to favor the diversity of the 11 songs over 11 songs that sound the same.

Like the band’s name, this album is royal. This may be due to the fact that they arranged strings on every track, giving it a sophisticated, orchestral feel that’s subtle enough not to interfere with the seductive rock energy of the album.

Renowned composer, conductor and arranger David Campbell (a.k.a. Beck’s father) agreed to do the string arrangements on three of the songs, “Misguided Sheep,” “Air Traffic Control” and “Hopesick” because the album blew him away. He thought what they were doing was “spectacular” and “time-changing.”

“We don’t have a formula,” Karscig answers about where they find their inspiration. “Sometimes we might have a chord progression, then a melody might come. ‘Air Traffic Control’ is from a journal entry I wrote years ago about a band we were in previous to Louis. We were on tour for a year, playing the same set every night. The band was drifting apart musically. Me, Mark and Jason were on one page, the rest of the band was on another. I just felt really disconnected, like up in the clouds floating in this lost space. I was ready to be grounded again.

“Other times Jason and I will sit down and decide to write a story. ‘A Letter to Dominique’ on our first album is a perfect example. We had the happiest chord progression and melody known to man, so we said, ‘Let’s come up with a story that’s really dark.’”

Excited about the recent release of Slick Dogs and Ponies, Karscig comments, “It’s supposed to make you feel good. It’s supposed to get you out of bed, inspire you and make you want to go hit on the girl that might end up being your wife.”

For those of you who think Louis XIV sounds like what you would imagine a band would sound like if Ziggy Stardust era Bowie made love to Marc Bolan’s cosmic mistress, then had a lucid dream about doing an indie rock album à la vintage AC/DC with Leon Russell on the piano, I challenge you to go beyond this type of referential categorizing. Every band is influenced by the music they listen to, but that doesn’t inherently define their sound. To me it’s very clear who Louis XIV sounds like. They sound exactly like Louis XIV.

Slick Dogs and Ponies is currently available. Louis XIV will perform Feb. 9 at the Wiltern in Los Angeles.