Barton Carroll: The Lost One
(Skybucket) 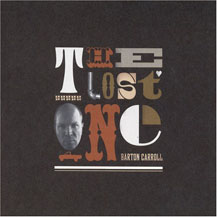 Singer-songwriter Barton Carroll reveals two things on his third solo effort, The Lost One: women are on his mind, and he gravitates to life’s darker side. Barton’s acoustic material combines folk, country and other roots music, while his lyrics indicate diverse influences such as film noir, Robert Frost and world history.

The Lost One is currently available.