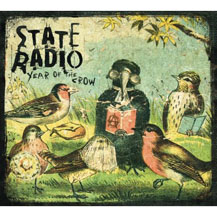 Reggae rockers State Radio are back with their new full album Year of the Crow. The band manages to float somewhere within the intersection of pop alternative, smoky rock and intoxicating reggae, resulting in an album that’s packed with amazing tracks of various styles and tempos.

Unfortunately, this also means that some tracks seem a bit lacking in comparison to the rest of the album, especially on the tracks where the reggae influence is less obvious.

Content-wise, when the first song on an album is entitled “Guantanamo,” you can pretty much get an idea of the politics of the album. While not all the album is political in nature, the lyrics do not beat around the bush (so to speak).

Year of the Crow is currently available.