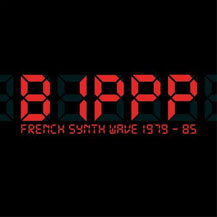 This collection brings together a lucky 13 cuts of vintage material from an esoteric group of French synth-based bands. Why lucky? Basically for getting this belated second chance to be heard, especially if you consider that this stuff was mostly ignored the first time around, even in France.

The group Ruth, for example, sold 50 copies of their debut album. Clearly their stuff was just never heard because “Polaroid-Roman-Photo,” included here complete with sound effects of a Polaroid spitting out instant pictures, sax augmenting the keyboards and flirty vocals, is irresistible.

You can peg everything here to a sound from the era that was successful. A Trois Dans Les WC’s “Contagion” bounces with an on-the-edge mania you’d expect from Thomas Dolby or the Talking Heads while TGV’s “Partie I” would fit easily into the Devo or Kraftwerk repertoire.