Finding a Home: Your guide to apartment hunting in Westwood 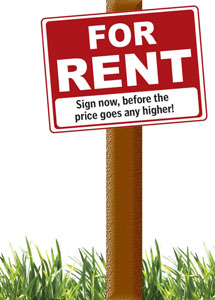 Dorms are home to constant company and convenience. On the other hand, dorms give people no privacy, added weight and generally horrible (or at least tiresome) food.

Still, when the time comes to move, it’s important to understand the procedures in securing a comfy and affordable place to live. This, though, is more often than not a painful procedure, especially in Westwood.

Many students are simply expected to know what to do after they move out: an unfair assumption considering that the “hold your hand” procedures in the dorms are nonexistent in the rest of Westwood.

“I had no idea what to do when looking for an apartment,” says Albert Fang, a fourth year Psychobiology major at UCLA. “I was just lucky that my roommate already knew people in the apartments.”

So, to help alleviate some of the stress that goes into apartment hunting, here are some handy tips when you’re looking for a place to live next year:

1. Start early. Unlike the dorms, where they give you an appointment date on which you can sign up for your room of choice, apartments offer nothing of the sort. Occasionally you’ll find a place that lets you know when they’re starting their waitlist, but generally you’ll have to find out yourself.

So, get out there as early as possible (you should already be starting as you read this) and start jotting down numbers and information.

“We didn’t start until May,” Fang states, “and we had to frantically search cause it was too late.”

2. Be persistent. “The managers are hard to get a hold of,” says Kim Lui, a fourth year MIMG student at UCLA. “I guess it’s because they screen their calls, so … keep calling.”

It is unrealistic to expect managers to always be free when you call, so the best policy is to try every day until you can get a definite answer regarding waitlists and apartment availability.

Also, given that the apartments don’t function under a central housing office, waitlists and availability differ from place to place, which can lead to frustration.

“All the different apartment buildings started renting out apartments at different times,” muses Liu, “so you never knew exactly when to call. Sometimes we’d call way too early and then when we call back later they already rented all their apartments out.”

Persistence may make you seem a little irritatingly determined, but it could very well pay off. Fang recalls that he “thought [he] wouldn’t find a place to live,” but after endless calling he lucked out and found an apartment close to campus with plenty of space and relatively cheap rent. So who knows? Keep trying and you may luck out as well.

3. Do your homework. You may jump for joy and spit out jellybeans when you find an apartment, but don’t rush in and sign the lease just yet. Ask to see the apartment that you’ll potentially be renting out, and make sure it meets your standards. Ask someone who lives in the building what they think of the place in order to get a better assessment of the general upkeep of the place as well as how efficient the landlord/landlady is.

Fang adds a note of caution: “Be wary of landlords who are too eager – they’re usually eager for a reason.”

As much of a hassle as apartment hunting may be, there are definitely benefits to the trouble. Besides having a kitchen, extra space and more privacy, there’s also something a little more personal about an apartment.

“It’s nice to have a home to come back to after class,” reflects Liu.