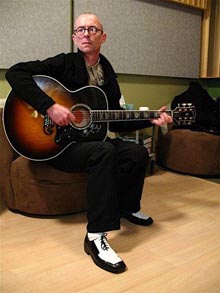 Attention ladies and gents: Michael Stumm has arrived. After years spent immersed in the punk-infused art and music scenes of New York City, he has situated himself among the sunny shores of Los Angeles.

This singer-songwriter is a unique blend of old Hollywood charm and rockabilly swagger. His sound marries the folk music earnestness of all the early Bob Dylan recordings with the renegade detachment of Lou Reed.

Stumm is making a play for the local music scene the way they did back in the day: like a class act. Along with his band, the Lonesome High, this multi-faceted performer has unleashed a collection of lush and enveloping folk-infused songs on an adoring public.

Their self-titled effort is peppered with manifold characteristics – most notably the fact that each song is named after a prominent actor or celebrity. The disc’s first track is titled “Danny Thomas” after the late icon of 1950s television. Other tunes like the up-tempo “Karen Black” and “Julie Christie” offer a fun change of pace.

Even Academy Award-nominated actor Willem Dafoe gets his own tune. And rightly so, considering he’s the record’s producer.

There’s no doubt that employing a critically successful and renowned leading man of stage and screen as a musical collaborator is like scoring a major coup. But for Stumm, having the Spider-Man star on his team was more a gesture of friendship and mutual respect than anything else.

“Will and I used to work together at a place called the Wooster Group. We worked there together for a long time,” relays Stumm.

He and Dafoe soon hit it off as cohorts, which led to the musician teaching the actor how to play bass so he could put him in his band.

Stumm’s musical influences are a diverse melange of pop culture classics, many of which may be unfamiliar to his audience. Among the people whose work inspired him early on are Bing Crosby, Louis Armstrong, several of the more famous singing cowboys like Ken Maynard and Roy Rogers as well as “Elvis, of course.”

Still, as a musician, Stumm isn’t completely rooted in the past. He boasts a wealth of contemporary favorites.

“For various reasons, I like both Blur and Oasis,” he admits.

He also invests his discerning tastes in the current alt-country movement.

When asked which one of the 12 tracks on The Lonesome High is his favorite, he’s stumped: “That’s difficult. They’re all like little children. They all have their points.”

Then, upon closer examination he concedes, “I think it’s the ‘Cookie Mueller’ song.”

It’s that reverential love of yesteryear that makes The Lonesome High a wonder to behold. While many so-called artists fixate themselves on finding the most current sound or achieving notoriety as the edgiest new group on the block, Stumm and his collective of musician friends breath life into the idea that some people make music sheerly for their own pleasure.

On any given day Stumm can be found, clad in a jacket or T-shirt, a pair of skinny jeans or vintage trousers, black and white Oxfords, wire-rimmed glasses and his world-famous biting wit. He’s an affable guy: polite when he needs to be, sarcastic when it suits him and incredibly knowledgeable in all that truly holds his interest.

His style aesthetic compliments the art that he creates. A licensed barber by trade, Stumm has also been hooking up the East Side’s finest and most fashionable ever since moving to town to be with his producer girlfriend.

However, don’t bank on him succumbing to the pretentiousness of his new surroundings. Despite the glint and shimmer of possible corporate sponsorship, you won’t see this musician shilling for his supper. For him, it’s more about the integrity of his craft – playing shows and meeting others that share his love and appreciation for performing.

“I’ve played music most of my life,” he confesses, “and I’ve never had any interest in it as a ‘career.’”