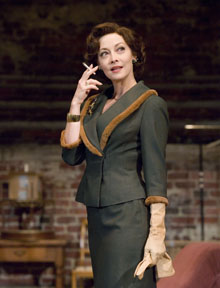 This tale’s latest incarnation offers a mish-mash of personalities and performances. Based upon actual events that intertwine the likes of director Orson Welles, actor Laurence Olivier and critic Kenneth Tynan, “Orson’s Shadow” falls a little short of the greatness implied by its impressive cast of characters.

Under the premise that they have been thrown together to produce a stage version of the quirky, modernist, Ionesco play “Rhinoceros,” the melee offers many hearty laughs, but very little purpose.

Scott Lowell is quite good and offers a sharp, dry-witted take on Tynan, but Charles Shaughnessy overplays Olivier as a bit of an egotistical, bumbling oaf against Libby West’s rather aloof portrayal of his “fiancée” Joan Plowright.

Bruce McGill as Welles and Nick Cernoch as his assistant Sean manage to hold their own among the mix, but it is Sharon Lawrence that shines in her role as Olivier’s estranged wife Vivien Leigh. Lawrence is captivating as she manages to arc her character’s slide from movie star to madness in a brilliant performance.

The production values are very good and the play is fun to watch, but it leaves you thinking, “What was the point?” Prior knowledge of the actual characters is also very helpful despite the overabundance of exposition.

The Pasadena Playhouse is located at 39 South El Molino Avenue in Pasadena. For more information, call (626) 356-7529 or visit www.pasadenaplayhouse.org.