Paris Texas: Not from France, the South or any scene in Between 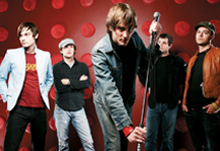 Picture the sunny fields of Wisconsin: green pastures, grazing cows, a plethora of cheese … and avante garde garage-style indie-pop-rock? The Badger State may not exactly make for the most conducive environment for the next big thing in music, but looking to claim the title as cream of the proverbial crop is Paris Texas.

"There are positive and negative points of being from Wisconsin, but we are a better band for being from there, because we didn’t get any attention forever," says drummer Sam Vinz of their home state.

Though they don’t have the same "scene credibility" as bands from either coast, Paris Texas started out more underground than almost all of them, literally and figuratively.

"We were doing a lot of shows at our house. We always had the basement shows and everybody looked like they were having so much fun. We just got together and decided to start a band," says lead singer Scott Sherpe on his band’s humble beginnings, adding, "I think our first show, we knew maybe six songs and did a cover of ‘Pretty In Pink.’"

And thus the fledgling band started the process of paying dues and working to break out of their small-town origins.

It’s been a long time and a lot of work since those days of basement shows and Psychedelic Furs covers, with Paris Texas since growing into a style all their own, undoubtedly setting themselves apart from the pack. Not above going so far as to create a new genre just for his band, Sherpe describes Paris as "Friday night music," which he explains is "the music you put on before you go out, and you’re still humming it once you get to the bar. It’s music to start the night out with."

Don’t get the wrong idea though. Paris isn’t trying to get ahead of themselves by any means, they’re still just getting a taste for how the real rock gods do it.

"We met David Lee Roth the last tour," exclaims Sherpe. "It was amazing. Never in my life would I have been like, ‘Someday, I’m going to bum cigarettes off David Lee Roth.’ He is everything you can imagine. I don’t think he does anything that’s not completely to the limit."

Even with their playful bravado, Paris Texas has never lost sight of what’s important nor have they been jaded by stereotypical rock star egos. Going back to the basement party mentality, Vinz says, "A show can be determined if there’s three kids in front totally rocking out. Those three kids are so much fun to play for – I don’t care if it’s 500 kids going crazy or three."

Sherpe continues his sentiments: "I think right now, we’d just like to have a full room, no matter if it’s in an arena or not," adding with it laugh, "It wouldn’t be much fun it was a 20,000 seater and only 50 people showed up!" Though they might take exception if it was the opening spot for Van Halen. Maintaining a great appreciation for modesty and simplicity, Paris Texas which will no doubt find musical success in the end.

Paris Texas’ new album, Like You Like An Arsonist, is currently available. For more information, visit www.paris-texas.com.