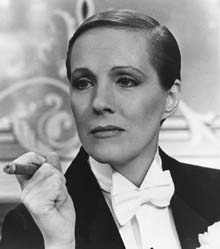 If the writer’s strike is killing your Oscar buzz, spend a night to remember the good ol’ days of the gilded statue with eight-time nominated Victor/Victoria (1982). The showing is a part of OUTFEST Wednesdays, the oldest lesbian, gay, bisexual and transgender screening series in the country, which showcases movies in hopes of preserving LGBT images in film.

Set in 1930s Paris, Andrews plays a struggling performer, Victoria, who decides that singing as a woman isn’t nearly as impressive as pretending to be a man dressing up like a woman. So, with a new persona, Count Victor, and a fake gay lover, her friend Toddy, Victor/Victoria takes to the stage and quickly becomes the most sought-after act in the city. Of course, hilarity – and impressive musical numbers – ensues.

Andrews makes it look easy. Her natural beauty shines through the slicked back hair, unflattering tuxedo and Cuban cigar smoking of her character’s alter ego.

With tunes by the late composer Henry Mancini, Victor/Victoria won three Academy Awards, including Best Music, and transformed Andrews, the former leader of the Von Trapp family singers, to her current status as one of the gay community’s top icons.

As one of the classic musicals featuring a cross-dresser, Victor/Victoria is the conservative ’80s answer to The Rocky Horror Picture Show and the tamer big brother to 2001’s Hedwig and the Angry Itch. If you like Mrs. Doubtfire and The Birdcage, forget the drama of this year’s Academy Awards and indulge in OUTFEST’s showing of Victor/Victoria.

Lesley Ann Warren (who got a Best Supporting Actress nomination for her role as Victor’s love interest’s girlfriend) will be there, and so should you.

The Egyptian Theatre is located at 6712 Hollywood Boulevard in Los Angeles. For more information, visit www.americancinematheque.com.