The Hottie and The Nottie: Guess Which One Paris Hilton Is? 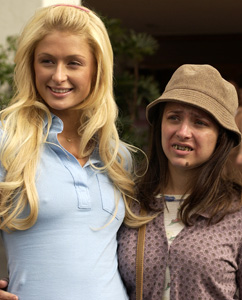 “I think a lot of people see me from ‘The Simple Life,’ I’ve been doing that show for five seasons. It’s a reality show where I’m playing a character so basically I’m acting in that,” says 26-year-old Paris Hilton. “And maybe people think that’s really how I am, but it’s not.”

Love her or hate her, Paris Hilton has become a household name, and there’s no stopping the young celebrity debutante now. Hilton, who coined the phrase “That’s hot” and showed little intellect when she first made headlines, has now proven herself as a young entrepreneur.

Although Hilton became notorious when her ex-boyfriend released a sex tape with her as the co-star and a judge sentenced her to spend 45 days in L.A. County Jail for violating probation, it seems as though what does not kill Ms. Hilton only makes her stronger. She has dived into anything and everything imaginable from a short-lived singing career to her own brand of clothes, shoes, five perfume fragrances and even her own brand of hair extensions. It’s safe to say that she has her own enterprise.

“I develop and design everything,” says Hilton. “I wouldn’t put my name on anything that I didn’t believe in.”

This goes for her movies as well.

While the budding businesswoman continues to flourish, so does her movie career. Hilton, who starred in House of Wax and Pledge This!, declares she takes acting seriously. In fact, she has hired an acting coach to help her improve her acting chops.

“I love being on set and meeting new people and experiencing it and being in front of the camera,” says Hilton. “Just being another character … it’s fun to escape from real life.”

Her latest film is a romantic comedy, The Hottie and The Nottie, which shows that beauty is everything. Hilton plays Cristabel Abbott, a gorgeous girl that every guy wants to be with, including her childhood friend Nate Cooper (Joel David Moore). The only problem is that she will not date anyone until her hideous-looking best friend, June Phigg (Christine Lakin), finds a mate, too.

“The writer came to me with the script and said, ‘I wrote this with you in mind, and there’s no one else who could play the hottie,” says Hilton, who had been offered a variety of roles before this one. Hilton says she read this script in particular and fell in love with it.

“It’s a really fun film, but it also has a really beautiful message,” shares Hilton.

“Ultimately the film is about friendship, and how who you are in the inside is not always reflective on who you are on the outside,” says Lakin.

“I just think it was a cute love story,” adds Hilton.

“This was just a fun movie to do,” Hilton continues. “It’s a romantic comedy. My next movie is different, then I’m going to do a drama after.”

Her next film, Repo! The Genetic Opera, is a musical, in which Hilton will be singing.

Along with acting in The Hottie and The Nottie, Hilton helps to produce the movie as well.

“It’s a lot of work because you’re basically there working on and off camera, but it was such a fun project, I enjoyed every minute of it,” she says.

Hilton is no stranger to being a producer. She helped produce many episodes of her hit reality series, “The Simple Life,” starring her and Nicole Richie.

Hilton has a lot to look forward to this month including her 27th birthday, which she will be celebrating in Las Vegas, and her fashion line, which will also be showcasing in Vegas.

When Hilton first stepped onto the Hollywood scene, she was most famous for being young and ditzy. Now she appears to be wiser and more goal-oriented.

“I’m a sweet person with a big heart, and I’m having the time of my life,” says Hilton. “I’m happy, and I just want to make people smile and bring color to the world.”

The Hottie and The Nottie releases in select theaters Feb. 8.