Willem Dafoe: Man Behind the Mask 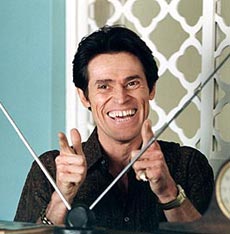 With a penchant for the darker side of life, Willem Dafoe often finds "compassion in unexpected places." Having inhabited everyone from Jesus of Nazareth in The Last Temptation of Christ to Spider-man’s nemesis the Green Goblin in this summer’s box office-breaking hit, Dafoe most recently finds himself filling the shoes of the real-life John Carpenter, a sexually driven character whose ill-fated passion ultimately gets the better of him in director Paul Schrader’s Auto Focus.

Because of his perverse sexual idiosyncrasies and odd obsessions, Carpenter is viewed as nothing more than a pathetic, hedonistic loser. But to Dafoe, Carpenter is a "tragic figure" with sympathetic qualities, who seeks the approval and support of leading man Crane in order to gain self-worth. It is these characteristics that make Carpenter all the more human in Dafoe’s eyes.

"We all feel like we need something and are a little incomplete," he explains. "That's where John Carpenter is a tragic figure, because he needs Bob Crane. He’s a very needy guy. He’s got to go to someone. In order to become whole he has to attach himself to Bob Crane."

"Somewhere, philosophically, we are all people and we are capable of different kinds of behavior," Dafoe adds. "And certain situations and environments and genetics invite us to be certain things."

Dafoe was drawn to Auto Focus because of the way that the film directly addresses "how people live and where they seek their happiness and how they continue their lives to try to feel good. [Carpenter’s] enamored with gadgets and gadgets are the key to this world of sexuality," he continues. "It's a totally available world where he's going to be transformed from this working stiff who works for the man at Sony, to this guy who is the man. He's livin' it up, he's living life and is alive and doing what comes natural."

"I find myself attracted to dark stories," Dafoe expounds. "I feel a little closer to the existential truths of living. Ironically I feel more uplifted by these dark stories because if told sincerely and passionately you leave the theater with a shift of thinking that I always like. Sometimes I'll walk out of a theater thinking, 'Oh my God, I've got to be more thoughtful abut how I look at things.' It motivates me to try and find the truth of what's really going on, what the true nature of things is. And I think it's only through those dark stories that that can happen. I love movies that challenge the way we look."

According to Dafoe, most good movies can't be reduced to a single tag line.

"Moby Dick is not about a whale," he says with a smile. "And Auto Focus is not just about behavior."

And just like any good movie, it’s seemingly impossible to sum someone up in a single sentence. Dafoe recognizes that even Carpenter and the Green Goblin have empathetic qualities that are worth searching for and was, in fact, drawn to acting by that search.

Actors are "given a safe environment to be deeply empathetic, to abandon yourself and disappear into something else. Serve something bigger than yourself. Serve a story, serve an idea... really invite yourself to try and be someone else," he says.

Having encompassed such a vast array of personalities throughout his diverse career, in the end, who is Willem Dafoe anyway?

Dafoe laughs at such a notion: "The idea of fixed identity is delusional anyway," he says. "It's a fluid thing. I try to encourage that. But obviously there's enough solid, never-wavering Willem Dafoe that I'm not in a nuthouse." He pauses. "So don't