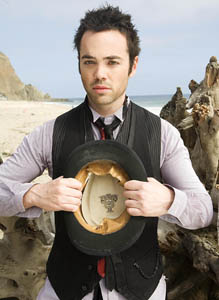 The first time he read the script for “Nip/Tuck,” John Hensley, who plays Matt McNamara on the show, knew, unequivocally, that he was looking at greatness.

“It was the best piece of television that I’d personally ever read,” he gushes.

As far as seeing himself as Matt, though, that was a different story.

“I felt I was totally wrong for the role,” he admits. “So I told the producers that I’d love to do a guest spot, but just not play Matt.”

The producers saw it differently, and a star of an FX series was born.

“They explained to me in the room why they thought that I might be just the guy for it, why I might be right,” he says. “Fortunately for me, they decided to hire me.”

It’s easy to see why Hensley wouldn’t feel an instant connection to Matt. While Hensley is a former horse wrangler from Kentucky with a warm southern accent, McNamara is a dark, twisted, damaged child.

McNamara is a kid caught up in the crossfire of his parents’ questionable and often self-serving choices. Unable to use his bizarre home environment as a pillar of moral truth, he searches for answers and identities in the women he pursues.

“One of Matt’s great downfalls is that he seems to constantly look for an answer and an identity in his relationships with women,” Hensley says. “He’s arguably a bit insane; he keeps doing that over and over again and expecting a different result.”

Though Hensley doesn’t share any of McNamara’s superficial characteristics, he admits that he has, “certainly been guilty of looking for an answer in the wrong place.” However, McNamara is just one brightly glowing star in a constellation of insanity.

“[The show’s] an extreme, over the top story with an extreme group of characters,” Hensley relays. “I mean, this is a highly dysfunctional group of people, and it’s kind of amazing that you put those people in the real world, and chances are they literally wouldn’t survive too long.”

For Hensley, this season has been uniquely fulfilling because McNamara’s progression as a character has mirrored his own aspirations for the character.

“It’s been a battle from time to time,” he says. “There have been moments throughout the course of the show that I’ve wanted to bring certain things to that role that didn’t fit with the idea the writers had. This season, there’s been more of a natural marriage between the writers’ vision of Matt and what I would like to bring to him as a character. I think that’s partly why I had such a good time, too.”

Why, though, does the audience have such a good time? The show is – in principle – kind of shockingly dark, comic and morbid all at once. Families dissolve, affairs with faux stepdaughters take place, breast implant surgery is shown on television. Though its competitors pay homage to predictable, black-and-white ideas of “good” and “bad,” “Nip/Tuck” proudly makes all of its characters intensely flawed – and doesn’t seem to care what anybody thinks.

Hensley speculates that this approach really resonates with its audience.

“It tells its story without apology. At the end of the day that’s the one thing I can always get behind. I happen to be a part of something that makes no apologies. I think that’s one of the main reasons why I enjoy working on the show.”

Though “Nip/Tuck” is on hiatus due to the writers’ strike, Hensley is still hard at work. His new film, Teeth, is currently in theaters.

“Teeth is a film that I absolutely love, and I’m so happy that I had the opportunity to be a part of it; it’s a really cool, hilarious movie,” he says.

The film is about a girl in a small town who discovers that she suffers from a mythical condition called vagina dentata – her vagina has teeth.

“The movie is hilarious,” Hensley assures. “It’s basically a dark comedy that really plays with this sort of horror genre, and it’s fantastic. If I were in college and I heard about a dark comedy about a girl with teeth in her vagina, I’d go see it!”