Step Up 2 the Streets: Showcases the Underground Dance Scene 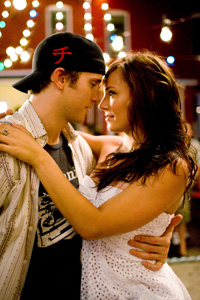 Step Up 2 the Streets introduces audiences to a new form of dancing – the underground dance scene. Featuring an amazing cast, including Robert Hoffman (Chase), Briana Evigan (Andie) and R&B star Cassie Ventura (Sophie), a memorable soundtrack and the directorial debut of Jon Chu, the flick spins a new twist on the battles of dance crews in urban neighborhoods.

Andie is an outcast trying to make it at the Maryland School of the Arts while hoping with maintain ties to the underground dance crew 410. Soon, she meets Chase, the star of MSA, and sparks fly from their passion for dancing. They create their own crew and prepare to compete in the biggest underground dance battle.

Hoffman is the shining star in this film and proves that this is only the beginning of his career. His amazing background in dance includes appearances in movies like You Got Served and She’s the Man.

Hoffman plays the character of Chase, whom he describes as very much like himself.

“I was lucky that this character was not a big stretch for me,” says Hoffman, who began dancing at a young age.

Hoffman truly understands the life of a dancer and hopes that his performance inspires others.

“Dancers are communal people because we have to be, but there is also a fierce and competitive spirit among dancers for props and respect,” he continues.

He also talks about the chemistry between him and Evigan.

“Right from the beginning we gelled and understood each other,” he says.

Newcomer Evigan started dancing at the age of seven and also brings authenticity to the film. When it came to the dancing, she took a completely different spin on it, giving her moves a more raw edge.

“Dancing to me is a way of expressing myself and getting out really great emotions or really bad emotions,” she explains.

She also shares that everyone can relate to her character.

“I think a lot of people can relate to Andie because she is a girl who has lots of problems with her family. She doesn’t have a mother and father. She is adopted into a family and lives in an area you would not want to live in,” Evigan tells.

Cassie Ventura plays Sophie, the jealous ex-girlfriend and is a triple threat. But what people don’t know is that while she’s a successful R&B singer signed to Bad Boy, she’s the one with the least dance experience. Yet she loved taking on the challenge of portraying Sophie and reveals that she was a lot like Sophie in high school.

“Working with Jon Chu I actually got to mold Sophie as a character,” she says. “She is a triple threat, and she’s really focused and determined, which I was like in high school.”

Ventura hopes that after seeing this movie, fans will see her as an actor and not just a singer.

Chu, a USC graduate, marks his film debut with Step Up 2 the Streets, after winning awards for directing short stories.

“This was the opportunity to make a real dance movie that I would want to see,” Chu states.

As a former dancer, he can relate to the characters. He wanted to make a movie about a group of people and a family.

“Andie learns to put herself on the line for other people and realizes about family,” he says.

Yet he also wanted this movie to be completely different from all the other dance movies. Thus, he used a handful of today’s hottest choreographers.

“Usually, only one choreographer will do a whole movie,” he says, “but I had to sit down and convince them that this would be a good movie.”

Step Up 2 the Streets gives us a look inside the dancer’s life and showcases a very talented cast to keep our eyes on.

Step Up 2 the Streets releases in theaters Feb. 14.