A Big, Easy All-Star Game: Which Players Made the Cut 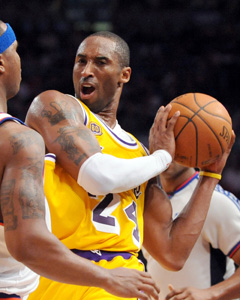 Symbolic of its survival from the horrible tragedy of Hurricane Katrina, the National Basketball Association made a commitment to New Orleans by awarding the city the annual mid-season classic in 2008. On Feb. 17, that game will be a reality, as the NBA world will travel to the Big Easy to play in the 57th Annual NBA All-Star Game at New Orleans Arena.

The rosters are finally set, and while there are some snubs this year, the 24 players selected to play in the annual game are definitely worthy of playing next Sunday. There are several familiar names in starting lineups for each conference.

Boston’s Kevin Garnett, who is playing in his first campaign as a Celtic, is having a most valuable player-type season this year and is the leading vote getter with 2,399,148 votes. Garnett is the new active leader for All-Star appearances, making his 11th appearance.

Shaquille O’Neal, the previous leader at 14 appearances, was not selected to play this year.

LeBron James of the Cleveland Cavaliers will also be starting in his fourth appearance in the mid-season classic. He will be joined in the frontcourt by Orlando’s Dwight Howard.

Both players have been instrumental in transforming their respective teams into Eastern Conference powerhouses. Howard, though, has been a standout in his fourth season, averaging 21.8 points and 14.5 rebounds per game.

Out west, the usual suspects fill out the starting lineup.

Kobe Bryant, who has surprised many critics by leading the Los Angeles Lakers to a 33-17 record while averaging fewer points than last season, will highlight a Western Conference team that includes two players from the Denver Nuggets (Allen Iverson and Carmelo Anthony) and two towers from Texas (Houston’s Yao Ming and San Antonio’s Tim Duncan).

The most unique aspect of this year’s game is that there are four international players: Steve Nash (Canada), Dirk Nowitzki (Germany), Duncan (U.S. Virgin Islands) and Yao (China).

This year’s host team, the New Orleans Hornets, will have two players represented. They are one of four teams that have two All-Star reserves playing in the game. The other three teams with two reserves are the Detroit Pistons, Phoenix Suns and Washington Wizards.

Other reserves include first-timer Brandon Roy, who is leading the upstart Portland Trailblazers on a playoff push despite losing top pick Greg Oden for the season. Joining him are Carlos Boozer of the Utah Jazz, Steve Nash and Amaré Stoudemire of the Phoenix Suns and Dirk Nowitzki of the Dallas Mavericks.

The East reserves feature the Detroit Pistons’ Chauncey Billups and Richard Hamilton, Chris Bosh of the Toronto Raptors, Caron Butler and Antawn Jamison of the Washington Wizards, Joe Johnson of the Atlanta Hawks and the Boston Celtics’ Paul Pierce.

As is the case every year, there are a fair share of deserving players who were not selected despite playing an All-Star caliber season.

Ray Allen – The third head of Boston’s three-headed monster has been just as instrumental in leading the Celtics to the best record in the east.

Deron Williams – Unfortunately, he plays in a conference featuring too many All-Star guards.

Hedu Turkoglu – Howard and Rashard Lewis get all the credit, but the Magic cannot go far without Hedu.

Chris Kaman – How does someone averaging 16.7 points and 13.6 rebounds per game not get selected?

Tony Parker and Andrew Bynum – Got bit by the injury bug, otherwise both would have made the team.

Al Jefferson – Minnesota really wanted him in the Garnett trade. He’s showing them why (21.4 points, 12.2 rebounds). Too bad his Timberwolves are in the Western Conference cellar.

Should any player be unable to participate in the All-Star Game due to injury, NBA Commissioner David Stern will select the replacement.