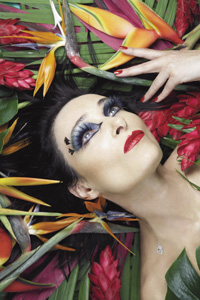 Throughout the course of humanity there have been tales of the elixir of life, a spring bearing forth the secret to longevity and eternal youth. Versions of the Alexander Romance claim that Alexander the Great traversed the Land of Darkness to claim his prize. Perhaps Siouxsie Sioux is on to something, then.

The long reigning “Queen of Goth” is among the elite who can claim relevance throughout the course of her career, with most of her catalogue as refreshing and influential today as the day it was created. Take, for example, the broad range of esteemed artists who continue to pay homage to Siouxsie, from Arcade Fire to the Mars Volta to Basement Jaxx, as proof of her lasting influence on the music world.

Siouxsie has constantly reinvented herself while remaining true to her intrinsic style. From punk icon to Siouxsie and the Banshees to famed duo the Creatures, she emerges in her most recent incarnation as a solo artist on her dynamic new release, Mantaray.

“This is the first time working with people that I have no history with,” she says, “which was exciting and refreshing at the same time.”

On commuting across the English Channel from her home near Toulouse, France to team up in Bath, England with production team Steve Evans and Charlie Jones for a series of five sessions, Siouxsie recalls, “It was actually Steve that I was interested in working with because a year or two before that he had worked on Robert Plant’s last solo album which was Mighty Rearranger, and I was just impressed. [I’m] not particularly a huge fan of Led Zeppelin or Robert Plant per se, but I thought the sounds, the production on the songs were remarkable and just really stunning.”

Inspired by a wealth of demos that flowed her way after her collaboration with Basement Jaxx, as well as by her own back catalogue, Mantaray brings her work full circle in a frenzy of sounds that makes sense for the veteran songstress.

“The album hatches high points of various elements throughout the 20 to 30 years [of my career]. Again, that’s subconsciously, I think. Mostly you can see the pattern of something when it’s been done, and I think when you’re doing it, certainly with me I tend to work spontaneously and of the moment. Only much later you actually see what’s happened.”

Deeply personal lyrics pepper Mantaray’s soundscapes, no doubt inspired by recent upheavals in Siouxsie’s world as she parted ways with husband and longtime musical partner Budgie. But rather than wallowing, Siouxsie offers a beacon of strength and guidance to her listeners.

“I think it was taking stock of various points that I’ve seen downs or lows. It’s easy when things are going well,” she reflects. “Life’s lessons are how you ride the bad times and how you react to bad news or bad situations.”

Indeed, the personal tone makes strides to wear away at the common misconception that she’s something of a dominant force to be reckoned with 24-7.

“I think people misconstrue someone knowing what they want with being tough. For me, I pretty much always know what I don’t want, and I usually have a good idea where I want something to go. But I’ll always be open as long as there are good musicians that I’m working with.”

What advice does one whose career has timelessly spanned multiple decades have to offer those that would seek out such a charmed fate?

“One never thinks about longevity or things lasting. You’ve just got to do it as long as you enjoy it. The trends within the music industry are totally irrelevant. And you shouldn’t really pay attention to what other people are doing. I think as an artist you don’t always know that what you do is not timeless and not really restricted to that year that you did it. With all my favorite artists you can still play their music now, and it’s still exciting.”

Mantaray is currently available. Siouxsie will perform Feb. 15 and 16 at the Music Box at Henry Fonda Theatre in Hollywood. For more information, visit www.siouxsiemantaray.com.