Top of the Pack: A Look at Why People Want to Go to UCLA 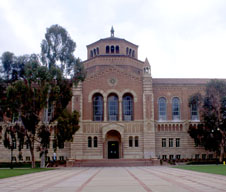 UCLA is once again the most popular university in the nation, with a record 55,369 applications received. Despite the presence of more “prestigious” schools in the nation, UCLA still managed to draw in the most applications, including 16-percent more from underrepresented students, which could add much-needed diversity to the campus.

So if UCLA doesn’t have the most prestige, per se, then what exactly attracts so many potential students to the university?

The consistent redbrick aesthetic of the campus remains one of the most appealing traits of UCLA. It’s really quite amazing how much a campus’s look can factor into a person’s decision to apply (and maybe eventually attend) a university. With beautiful architecture and rolling green hills, one can capture the feel of an Ivy League school without the price and distance (not to mention the near-impossibility of getting into one).

But the campus isn’t the only thing that goes into consideration. Choosing where you’re going to be for the next four years of your life is a pretty big decision, and other factors outside of academics must be considered.

A school in a small state may sound appealing to those who want a change of pace, or to get the hell out of the state and away from their parents, but stop for a second and consider what you’ll do once you get there. Granted, there’s nothing particularly bad about these schools – many top schools aren’t smack dab in the middle of a busy city. But at the same time, there’s nothing particularly interesting about these schools either.

In a city like Los Angeles, you can never really say that you’re bored – being “bored” here doesn’t stem so much from the lack of activity but rather from laziness to get up, go out and do something. With Westwood a short walk away, Santa Monica and Venice a relatively short bus ride away and everything else a bearable car drive away, there’s always something to do, and there’ll almost always be good weather to accompany you.

“There’s stuff to do around campus,” says Chiang. “I feel like the students have a social life.”

Plus, once you hit the big two-one, even more opportunities open up in a big city. Los Angeles is home to a wide variety of bars, clubs and concert venues that are reserved for those of age. Coming to UCLA can be thought of as an investment for some quality partying in the future.

Ultimately, though, it comes down to balance. Many universities gravitate towards extremes and end up being branded as “the party school,” “the nerdy school” or “the insanely competitive school.”

People always have stories about drunken debauchery on a Monday night or students blacking out library books to get the edge on a midterm. Seeing how most people probably don’t have the energy to party (or study) every night, UCLA manages to strike a good balance.

“It’s not just academics here,” emphasizes Chiang. “But it’s also a good academic school, so it’s a mixture of both.”

As college acceptance letters start trickling in and a new freshman class enters in the fall, be sure to take a look around you. Instead of rushing to class, take a minute and soak in the redbrick architecture. Take a break from studying and walk down to Westwood. Set aside an afternoon and take a trip to the Getty, the LACMA or 3rd Street Promenade.

Be glad that you’re at a campus that can inspire you, in a city that can entertain you. Enjoy your stay at UCLA, however long that may be, and don’t take for granted that you’re attending the most applied to university in the nation.