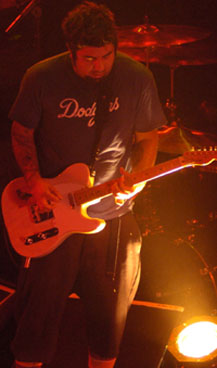 Rock ruled the streets as the House of Blues invited the Deftones to put on a show, the third night in a row in So Cal. The excitement started early, as rockers and metal-heads began shouting for Deftones’s Chino to take the stage during a warm-up spin from DJ C-Minus.

C-Minus hip-hops the turntables for Power 106, but on this night he was spinning everything from Korn to Led Zeppelin. Though he kept the energy flowing, Deftones’s fans remained restless. And when he played a little Team Sleep (Chino’s side project), the tease only ignited more demands from impatient fans to "get off the stage."

Only the Deftones would satiate the crowd. Chino, sporting a Dodgers T-shirt, spent too much time between songs cracking stupid jokes about the irony of being on drugs and performing in Downtown Disney. But the show spoke volumes in comparison, as the music took fans on a roller coaster ride of heavenly melodies and breakneck rhythms. Chino’s vocals were characteristically both angelic and demonic, depending on the particular song and the moment.

Deftones played a substantial set featuring tracks from all four albums, but heavily rotating songs from 1998’s Around the Fur and 2000’s White Pony. They also played some new music, expected for release on a new album in spring of next year, that Chino referred to as "straight evil." To the crowd’s delight, the band also gave tribute to The Cure’s "If Only Tonight We Could Sleep." Besides a few technical difficulties and a little band miscommunication, the show was nearly as satisfying as Mr. Toad’s Wild Ride.