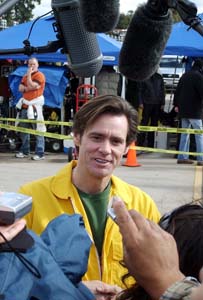 It’s not everyday you get an invitation to watch Jim Carrey “jump off a bridge,” but recently I was there when he did just that! It was the last day of shooting for Carrey’s upcoming film, Yes Man.

Waiting for a small squall to float by, Carrey was physically charged and mentally ready to go when he blurted out, “A lot of people don’t want me to say this, but they call this Suicide Bridge because a lot of people make the ultimate choice here, but we’re going to transform it today. Today it’s Yes Man Bridge, and it’s where you say ‘yes’ to life. So that’s what I’m going to do. I’m going to transform this sucker. I’m going to spread love all over it like peanut butter on sourdough.”

Carrey’s stunt double was brought on set and prepped for the jump. Then Carrey picked up a megaphone and shouted, “Stop right there. For the first time ever an actor is actually going to stand in for the stuntman.”

Carrey is obviously mortal. The jump was actually a bungee jump, but no small feat just the same. When the director yelled “action” he dove 15 stories off of the Colorado Street Bridge without hesitation.

As to why his character in the film even jumps off a bridge in the first place he explained: “Basically, the story is about a guy who says no to everything and avoids relationships and avoids getting involved in life because he wants to avoid the responsibility of life. So he becomes a shut-in and just comes upon this class, this seminar that’s about saying yes to things, so he decides to say yes to everything in his life no matter what it is, and finds out that’s not such a good idea either.”

Always going for the funny side of things, he added, “Most of the time there are some things you shouldn’t say ‘yes’ to. There are some positions in yoga that I don’t agree with at all, that I’ve regretted frankly when I’m in the middle of them.”