The Spiderwick Chronicles: Transports You into the Extraordinary 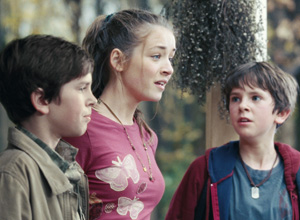 Things really couldn’t get much worse for Helen Grace (Mary-Louise Parker). She recently separated from her husband and is doing her best to make things better for her stressed and depressed family.

With no other options available, she moves her daughter, Mallory (Sarah Bolger), and twin sons, Jared and Simon (Freddie Highmore), into a rundown estate that has been passed down through her family and into her keeping. Young Jared discovers a secret journal that his late, great uncle Arthur Spiderwick (David Strathairn) left behind in his dusty, old attic office.

He also discovers an otherworldly little friend in a brownie named Thimbletack (voiced by Martin Short) that has been guarding the book all these years. In no time, they’re all thrown into a magical world of faeries, trolls, goblins and sprites.

The Spiderwick Chronicles is based on the popular series of books of the same name, written by Holly Black and Tony DiTerlizzi. The movie, which covers the first five books in The Spiderwick Chronicles series, is heavily soaked in special effects using the latest CGI technology to bring the magical fun and wonder of the books to life on the big screen.

Highmore has been making a name for himself as an up ’n’ coming young actor. He was Charlie Bucket in Charlie and the Chocolate Factory and had roles in last year’s hits August Rush and The Golden Compass.

Still, playing twins and opposite CGI creatures of all kinds was quite a stretch for the teen-aged star.

“It was quite challenging, on the whole, working with CGI creatures and twins, especially at the same time, and looking at ping pong balls and crosses on the walls and trying to remember which was which,” he shares. “I think in that respect they tried to make it as easy as they could. They showed us various animations of how it would look, and they had cardboard cutouts and stuff so we wouldn’t just be going at it without any knowledge at all.”

Specifically on portraying twins and trying to bring something a bit different to each character, Highmore says, “I was looking at changes that might have happened to them as they were growing up. I mean, genetically they’re the same person. And so in a sense it’s just interesting to look at how they reacted to different situations as they’ve been growing up and the way they’ve reacted to their parents’ divorce is key. Simon is perhaps more internal but still just as hurt.”

Bolger, who made her big cinematic debut in the film In America, and will play the young Mary Stuart next season in the acclaimed TV series “The Tudors,” relays she was impressed, but challenged by the special effects aspect of filming the movie as well.

“I was [in front of] the blue screen like 24 hours a day,” she says. “I think that the creatures and things like that were great fun. It was just so unusual to be kicking and slicing and punching things that were nowhere near ... just air.

“And then the twin thing was just another aspect. There were so many things in this movie. There was only one Freddie, there were no goblins and, when we drive up to the house and you see all the forest? Those leaves were added. It’s freaky. So crazy.”

Authors Black and DiTerlizzi are both very pleased with how the movie represents the stories they created.

“This is the story of ordinary kids in extraordinary circumstances,” states DiTerlizzi about why today’s audience can relate so well to the film’s content. “They have no special powers. They don’t live in a land ‘far, far, away.’ They have real life issues to deal with like any other kids.”

Though the film may appear to be geared towards a slightly younger audience, and you might think you need to tag along with an underaged friend or relative, don’t bother. It’s a fantastical romp for the kid in all of us.