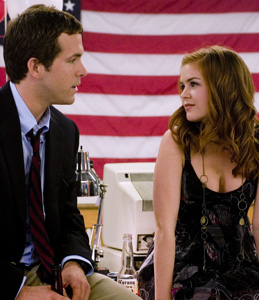 Opening on Valentine’s Day, Definitely, Maybe seems like one of those saccharine chick flicks that girlfriends force their boyfriends to take them to. However, there is, surprisingly, more to the movie than cliché plot lines and sappy dialogue (although those are included, too).

The premise of the movie centers around Will Hayes (Ryan Reynolds) and his daughter Maya (played by an adorable Abigail Breslin). Maya tries to make sense of her father’s impending divorce, and she grills him about how he met his wife and how they fell in love. Will, in turn, tells the story of his romantic relationships with three women, changing the names so that Maya has to try and figure out which one is her mother in what she calls a “love story mystery.”

Will starts his story in 1992, when he’s an aspiring politician who moves to New York in order to work on the Bill Clinton campaign. From there, he weaves the tale of how he met Emily, Summer and April, as well as how he developed some kind of relationship with each woman. The story swiftly moves through the years, as Will flourishes and struggles with both his career and his relationships.

All of the women, along with Reynolds and Breslin, act well and are likeable. More than that, the movie is actually funny. There is some smart dialogue, straying from the typical romantic comedy’s tendency to rely on physical humor.

At the same time, the movie still has its share of cheesy scenes which are obviously meant to tug at your emotions. Granted, the scenes manipulate emotions effectively, but they still feel like a cheap shot to the heart.

Overall, though, the movie works beyond a cookie-cutter romantic comedy, offering clever lines and great characters.